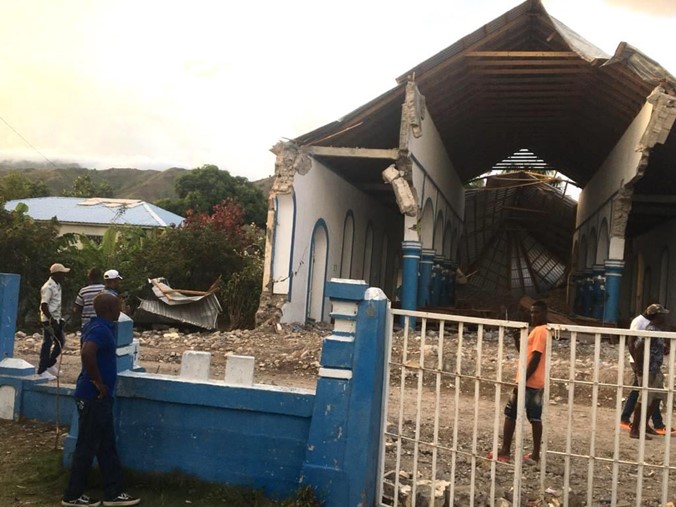 On Wednesday August 18 and Thursday August 19, 2021, I went to the southern department of Haiti, which was very affected by the earthquake of August 14, 2021, to visit some friends and colleagues who live in this region. I also wanted to be present on the scene to see with my own eyes what many media kept reporting about the dramatic consequences of this earthquake which had just ravaged the southern peninsula.

Getting to the South from Port-au-Prince, the capital, is not easy, because you have to cross a forbidden zone, Martissant, the southern exit of the capital, which has been controlled for several months by armed groups. This Wednesday, they decided to take a truce and people rushed to cross this form of border within the city to join their families. 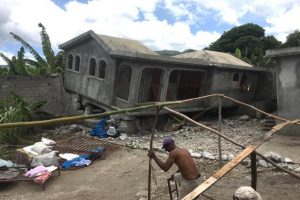 When you approach the cities of the South, you can already see the damage with landslides littering the tracks, still partially obstructing the passage, sections of mountains that have slipped, streets split, trees uprooted by the violent movement of the earth … Signs placed in the middle of the road by residents indicate that in this area, there are also victims with needs and that they should not be ignored. At the entrance to the town of Les Cayes, there is an enormous traffic jam with vehicles of family members arriving to bring some help and comfort to their relatives and trucks full of emergency aid trying to reach an office.

I saw, and I understood a little, the depth of the crisis that we are experiencing in Haiti, for lack of public policy in favour of the population. Here and there houses are completely flattened, others damaged with deep cracks, others still standing, intact, despite the force of the relentless aftershocks.

Among the 2,000 deaths recorded, the South department accounts for more than half of them. We are talking about 500 deaths in Les Cayes alone and everyone understood that they meant the city that bears this name. Which is why this is where help goes first. But we were mistaken. The majority of deaths are to be found in the communal sections, which are mostly rural communities. And when we mention Les Cayes, it is about the entire municipality including of course the city as well.

We have not yet finished counting the wounded and the dead. Five days after the earthquake, people are found alive under the rubble. Here at OFATMA Hospital, we watch the relentless comings and goings of helicopters filling the air with their thunderous roar. In this cracked hospital, the wounded are sorted on the court and the most serious are transported to other hospitals in the country through these helicopters made available to Haiti by the US Coast Guard.

A little further on, is the office of the Departmental Directorate of Civil Protection, which should represent the focal point of the operations. All-terrain vehicles belonging to humanitarian aid organisations come and go and meet with each other endlessly. Lots of people in the court, a few in “DPC” uniforms, but you don’t get the impression that anything big is really moving in this place when you take into account the scale of the disaster.

Suddenly, a political leader appears, flanked by motorcycles and vehicles following him and cameras filming his show. He has come, he says, to visit the victims. But everything suggests that behind all this is looming a sort of political campaign.

In Les Cayes and Camp-Perrin (another nearby town), a few tractors are busy demolishing collapsed buildings in order to search for any survivors or remove bodies that are already starting to decompose. During the first two days after the earthquake, without a rescue team, it was the population, with the means at hand, who brought out the survivors and also several dead from under the rubble. 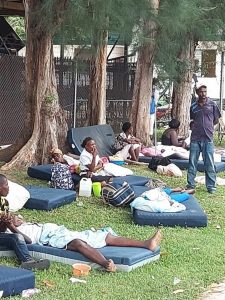 Outside, especially in the communal sections, the people are suffering and desperately waiting for help, especially a tarp or a tent so that they can take shelter in the evening. The day after the earthquake, on August 15, 2021, the victims experienced a heavy downpour due to the passage of tropical storm Grace. In the evening, it is very difficult to move around in the cities, because the streets are now used as dormitories. Due to the incessant aftershocks, people who still have a house standing are afraid to enter. But most don’t have a house anymore. Some communities are for more than 80% destroyed according to first inventories. In the evening, families throw a piece of cardboard or a sheet on the ground so they can lie down and get some sleep. To reach the place where I was going to spend the first night on Wednesday August 18, in Aquin, I had to wake several people from their sleep in order to clear the road a little and let the vehicle pass which carried medical equipment, a little medicine. and food for my relatives and friend and the Cuban brigade which is active in this city to take care of the wounded.

I noted that the vast majority of houses that did not withstand the earthquake have been recently built, although some old concrete constructions or structures made from lightweight materials have also collapsed. It is clear that there is a lot of work to be done in Haiti so that the constructions are done in a different way. The resistance or not of houses to the shock of the earthquake is indicative of the level of compliance with basic building standards in a space like Haiti very vulnerable to natural hazards like earthquakes, cyclones, among others.

Life is slowly picking up its course

Despite the palpable pain on the faces, I have found that life is slowly picking up its course. Street food vendors are already busy preparing food, stalls are forming to sell the little that was left of a stock saved from the rubble, peasants go to graze their animals … Women take care of the children, wash the laundry, men remove debris from the rubble to try to forge a transitional shelter for their family. People have no choice. They have to get back on their feet to survive, because they do not expect much from the state and cannot count on NGO help that is slow in coming or might not come at all. 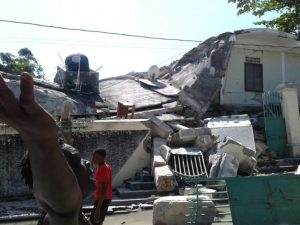 In five years, this is the second time that the Great South of Haiti has been hit by a major disaster. In October 2016, it was the passage of Hurricane Matthew that severely damaged the entire region. After having recorded two major earthquakes (7.2 on the Richter scale) in the interval of ten years and endured the violence of several hurricanes, Haiti must rethink its building system, the development of its territory , risk and disaster management with a view to better protection of its population. The disasters recorded each time are not natural but rather the result of bad policies and above all of a great lack of attention for the population and for the fragility of this island which is crossed by many faults and which being on the way of the cyclones.

After this new disaster and an extremely difficult and volatile political context, will the Haitian people still find the necessary strength to recover?