Webinar on the Political Crisis in Haiti 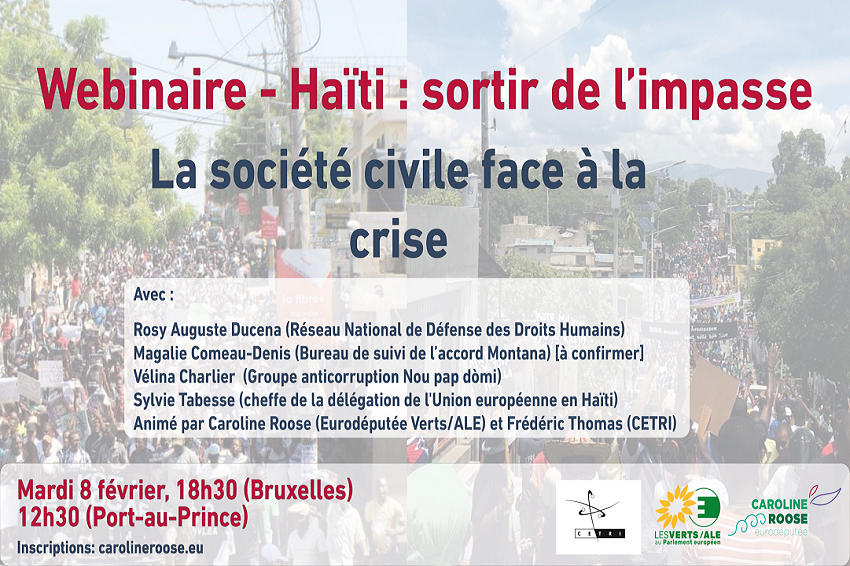 Three Haitian women explain the situation, the efforts and their disappointment

At the initiative of the Greens/EFA deputy, Ms. Caroline Roose, of the European Parliament and supported by the Belgian Tricontinental Centre (CETRI), 3 Haitian women took part, on February 8, 2022, in a Webinar about the situation in Haiti. Previously, the organizers had announced a debate with the Ambassador of the European Union (EU) in Haiti, Ms. Sylvie Tabesse. But in the end, she withdrew her participation and only took a few minutes to talk about the EU’s actions in terms of aid to Haiti, while specifying that she would not participate in the debate since the EU is “non-partisan”.

This decision did not at all please the speakers who strongly emphasized this in their interventions. However, they took used this opportunity to explain to the public the difficult situation in which the Haitian people are struggling, their criticisms  in terms of the behavior of what is generally called “the international community” and the efforts of several civil society groups and of the political world to seek a Haitian solution to the crisis.

First of all, Ms. Rosy Ducéna of the National Network for the Defense of Human Rights (RNDDH), presented evidence showing how the human rights situation has continued to deteriorate over the past four years. “From 2018 to 2022, 15

massacres and armed attacks have been recorded in deprived neighborhoods during which hundreds of people have been murdered or have gone missing and where dozens of women and girls have been raped. ….However, no judicial investigation has taken place, despite the fact that suspects including state officials have been indexed in the preparation and perpetration of some of these acts…….Gangs are expanding their territory. The living conditions of the population are deteriorating. Since July 2021, after the assassination of former President Jovenel Moise, a Prime Minister has taken control of the country. But the situation continues to deteriorate”, deplored Ms. Ducéna. She underlined that in such conditions, it is impossible to speak of free elections. The recent assessment of the human rights situation in Haiti carried out on January 31 as part of the 40th session of the Universal Periodic Review (UPR) of the United Nations Human Rights Council is described by her as fantasy. Without serious improvement in the security situation, an audit of the electoral system including that of the national identification card and a consensus between the different actors, Ms. Ducéna does not see how the country will be able to organize democratic elections. She invites the European Union “to listen to the Haitian people and to avoid supporting an electoral process that will lead the country to new crises“.

Mrs Vélina Charlier, of the Petrochallenger Organization “Nou Pa p Dòmi = We remain Vigilant”, explains that it is the same regime from before which is still in power after the assassination of Mr. Jovenel Moise and which continues the same politics of corruption, impunity and planned terror. She condemns the unconditional support of the international community towards the leaders who have come to power in Haiti. Yet she points out there is “no serious dialogue of this international community with 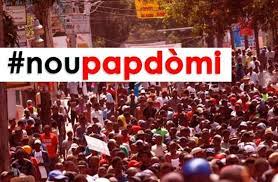 Haitian civil society organizations, while it maintains a rhetoric on the importance of citizen participation in the affairs of the country“. Ms. Charlier denounced the support given by the European Union to Mr. Ariel Henry, despite the strong suspicions that weigh on the latter in relation to the assassination of former President Moise. She condemns the continued efforts made by foreign diplomacy in Haiti grouped in a form of union called “Core Group” to systematically boycott the efforts of Haitian civil society to get out of this situation. She demands respect for Haitian strife for democracy, an end to hypocrisy and to support of corrupt politicians in order to allow the Haitian people to find their way to dignity.

Ms. Magalie Comeau Denis is one of the initiators of the citizen movement for the search for a Haitian solution to the ongoing crisis in Haiti. She began her speech with an excerpt from the poem “Last message” by Jacques Stephen Alexis, a committed poet and political activist whose 100th birthday is being celebrated this year. She explains how the PHTK regimes (Parti Haitien Tet Kale) which have benefited over the past ten (10) years from the support of the international community have c 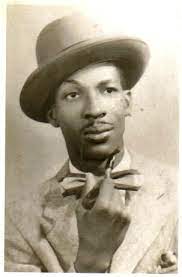 ompletely destroyed the institutions of the country, despite the presence of UN forces who claim to come to ” support democracy in Haiti”. “Today, executive power is exercised by a single man who has been instructed by the Core Group. There

is no president, the Court of Cassation as well as Parliament are dysfunctional. None of the sovereign institutions can assume its function. The country is placed under international trusteeship which supports those who destroy us”, pointed out Ms. Denis. She explained the steps taken since the beginning of 2021 by a group of organizations from different sectors (peasants, unions, professionals, churches, etc.) among the most representative of the country, which were joined by political organizations and which led to the agreement of August 30, also called “Montana Agreement” for a Haitian solution to the crisis. She criticizes the behavior of Ms. Tabesse who refused to debate with them while taking the time to talk about the progress of the current government after having shown its breakup. For Ms. Denis, “this is the most convincing way to show partisanship”.

The debates that followed these three presentations focused on the agreements presented by the different groups, on the process that led to the Montana agreement, on the interests that could motivate the behavior of the USA and the Core Group in the current context, on the type of relations with Haiti that civil society is expecting from the international community, etc. Questions were also addressed to the European Union. But due to Ms. Tabesse’s absence, MP Roose promised to send them to the EU delegate in Haiti. Similarly, the parliamentarian promised not to give up Haiti and to continue her initiative to raise awareness about the current reality of the country, as she had done in 2021, when she had a resolution on Haiti accepted by the European Parliament. This webinar on Haiti ended with a summary of the presentations and debates by Mr. Frédéric Thomas of CETRI, followed by words of thanks from the speakers.