TROPICAL STORM LAURA HAS CAUSED MUCH DAMAGE IN HAITI 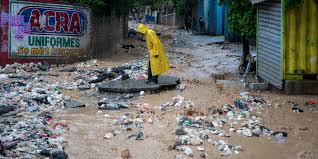 Yesterday, Sunday August 23, tropical storm Laura has hit Haiti. A lot of damages has been registered. On the following morning at first count nine people are believed to have died, two have disappeared, many vegetable gardens have been destroyed and farm animals have been washed away, not talking about the many houses that have been flooded. The South-East and the West departments seem to be hit hardest.. But damage is noted just about everywhere in the country that has become more and more vulnerable at the slightest shower.

The storm passed quickly over the country and it was difficult to predict its route: first there was talk about the north, than the centre and finally about  the South-East and the West. Many people were not aware of the approaching storm and were hit unexpectedly by its presence.

In Port-au-Prince, many roads became river beds and the force of the water washed away cars, motorcycles and even human lives. You had not only to worry living next to a river or a gorge. Nowadays, wherever you are in Haiti you may become a victim of the flood of stormwater that cannot find its way after a shower.

The lack of governance, the indifference of the country’s leadership and the carelessness of the citizens are the majors causes of this sad situation. Each year, the country is faced with catastrophes more deadly than before, but society is taking too long to get their act together and give the necessary attention to the environment.

Over the past two decades a lot of effort has been given by NGOs, civil society and even the State to set up emergency structures. Countless seminars have been organized, committees installed, materials bought and distributed, communication systems set up. But the problem is at level of prevention. The city councils, which should play a major role in the management of land don’t have the means to do this. Trees are cut and houses are built everywhere while those responsible close their eyes. Everything is in the hands of those in power in Port-au-Prince, who use all available resources and who take all decisions. The facilities are there, but without the ability to act effectively because at a higher level, the means to improve land management are not being put at their disposal.

This new disaster is hitting the country which is already involved in a sharp political crisis, with a condemned  government which people hope will step down soon and which has not managed to solve any problem. The storm arrived during a situation of complete dislocation of institutions and organisations that have little relation with the State while caring for the environment demands a general consensus and individual activities that all go in the same direction. The storm arrived at a time when COVID-19 is still present, even though the number of daily reported cases has decreased a lot and all activities, including schools and other public places, have started again.

Haiti is in the middle of the hurricane season. Laura is the first storm that has really hit the country. We fear the arrival of other hurricanes, if we take the predictions for this year seriously. We hope that the message given by this first storm of the season will be understood. We hope that the Haitian people will finally take their future into their own hands, and above all that they will give the necessary attention to the environment which will continue to hold them to account.