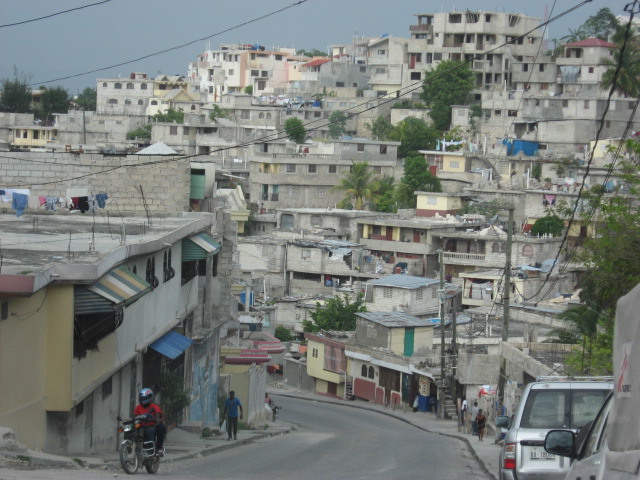 No end to arms trade and gang wars

“Violence in Haiti. Dozens dead fighting for control,” read the BBC News headline in mid-July. Is it still relevant news? Or take this headline, three days later: “Gang Violence in Haiti: The ‘UN prohibits the trade in small arms”. Will this decision of the Security Council contribute to curbing the influx of heavy weapons? Haitians suffer from violence, insecurity, the economic crisis, the lack of almost everything. Human rights organizations are sounding the alarm, the UN Security Council is meeting, the press is reporting, and the Haitian government is silent.

At first glance, nothing seems to change around Haiti. The Security Council extends a mandate and gang violence increases. Since last year and the year before the situation remains the same, even worse… And maybe we can even go back ten years, or more. Because every year the United Nations Security Council extends the mandate of a peacekeeping mission or a UN office in the Caribbean country. Yet, gang wars are on the increase, the arms trade does not stop and people are silenced.

On Friday July 15, the Security Council discussed the extension of the mandate of the United Nations Integrated Office in Haiti (BINUH). This agency started in 2019, after the departure of the last peacekeepers from Haitian territory. During the half-hour

meeting, the Council reiterated that all Haitian stakeholders must agree on a process of “inclusive, peaceful, free, fair and transparent legislative and presidential elections as soon as security conditions and logistical preparations permit”. Members of the Security Council also demanded an immediate end to the gang violence and criminal activities plaguing the country. They followed suit by declaring that gang members and their supporters, criminals and human rights violators, could be subject to a travel ban and they could be denied access to their (foreign) assets.

China, through its ambassador Zhang Jun, was the only country to look back on the long history of UN missions, which have done little to increase stability and security in the country since the 1990s. He also recalled that the previous renewal of the mandate, in October 2021, proposed a reassessment after six months. But, Zhang said, government institutions are crippled and the country has fallen into a security vacuum amid gang violence and economic hardship. According to Zhang, this calls for a review of BINUH’s mandate. He also pointed out that Haiti does not produce weapons itself, but at the same time the weapons available to the gangs are of a heavier caliber than those of the police. Countries must work together to stop the arms trade to Haiti.

But the Security Council did not agree on a comprehensive ban on arms sales, as proposed by China.  An agreement was reached only to ban the sale of small arms and ammunition to private individuals, known as “non-state actors” (read: gangs).

Meanwhile, the violence continues unabated. According to a recent report by the Catholic human rights organization Justice et Paix (CE-Jilap), 557 people were killed in violent acts in the capital of Port-au-Prince during the first six months of this year. These figures show a sharp increase from a year earlier, when 340 people were killed in the first six months. The month of July

began with a new outbreak of violence. In an attempt to gain a foothold in Brooklyn, a section of the poor neighborhood of Cité Soleil, the G9 gang collective clashed with the ruling gang G-Pèp (People’s Gang). The exact number of victims is unknown, but according to the human rights organization RNDDH, at least 89 people, more than half of whom were local residents, were killed by stray bullets or other forms of violence. In a statement, RNDDH reports that government equipment was used, including bulldozers, to raze about 150 houses. The director of the National Equipment Center denies any involvement and claims that the bulldozers were recently stolen. But it is well known that there are links between gangs on the one hand and politicians and civil servants on the other. Indeed, the leader of the G9, Jimmy Chérizier, better known by his nickname Barbecue, is a former police officer who still has the necessary contacts.

Brooklyn is a poor and isolated neighborhood where thousands of residents depend on trucks for drinking water and food. Now these can’t reach the neighborhood anymore, so people are dying of hunger and thirst. According to the head of the local branch of Doctors Without Borders, Mumuza Muhindo, it is impossible to determine exactly how many people were killed. The neighborhood has become a war zone.

Haiti has long suffered from gang violence. But in recent years, the number of gangs and gang members has increased enormously. Sociologist Eric Calpas has been researching gangs in Haiti for years and has seen their numbers grow from around thirty-five in 2004 to more than two hundred today. Growth has several causes. The failed government that has lost all authority and control, while maintaining ties to the gangs, is one. But the utter desperation of young people is also a breeding ground for gangs.

In Haiti, almost half of the population is under 24 years old. They mainly work in the informal sector, but employment opportunities have declined sharply due to the economic crisis, which has been exacerbated by the COVID 19 pandemic. It is a downward spiral, as violence and insecurity make that shops and businesses are increasingly closing. The same goes for schools: UNICEF said last May that gang violence had caused the closure of 1,700 schools, leaving half a million children without access to education. In any case, education is reserved only for those who can afford it. All of this means that young people are increasingly susceptible to gangs, which after all provide (some) money and power. The gangs themselves are responding to this by recruiting stray youths, some as young as 10 or 12, under the guise of money and security, Spanish news agency EFE reported. Until 2018, children were rare in gangs, but in recent years their numbers are increasing.

Meanwhile, there remains a deafening silence from the government. “Yes, the international press is paying a lot of attention to the situation in Haiti these days,” says Colette Lespinasse, correspondent of the CoEH in Haiti. “The Haitian government, that is to say the Prime Minister and the ministers of his cabinet, seem to be the only ones not to be “informed” of the dramatic events: no word, no gesture, nothing from these leaders . It’s a shame!”

This article was originally published in Dutch on the site of La Chispa: www.lachispa.nl