Ten years after the earthquake Haiti rises against “darkness”. 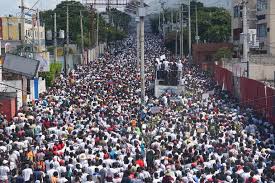 The riots and massive demonstrations that have been disrupting public life in Haiti since the summer of 2018 –  and have been growing in number and intensity during the last weeks – are an expression of what the Haitians call bat tenèb : fighting against darkness. Haitians are showing their anger about the lack of real progress and change, almost ten years after the earthquake.

On January 12, 2010 Haiti was severely hit by a major earthquake. The natural disaster had devastating effects. Two to three hundred thousand people were killed. One and a half million people lost their homes. The material damage was beyond imagination. The international compassion for and solidarity with Haiti were large. And the ambition was enormous: “We will build back a better Haiti.”

Rebellion of the oppressed

But did the emergency I.V. bag and the support for reconstruction lead to a better Haiti? Looking at the current situation one can only wonder. Haunted and taunted by rising costs of living, lack of fuel, corruption, gang violence, and political and economic mismanagement thousands of demonstrating citizens have taken to the streets. The call for the resignation of president Jovenel Moïse is getting louder and louder. It is the “rebellion of the oppressed against their dehumanisation”, says human rights activist Colette Lespinasse.

The immediate cause for the current crisis was a combination of an absurd and short-lived rise of the fuel prices and the disclosure of a major corruption scandal. But the real causes of the turmoil go back a lot further. On the one hand it is about the presence of a predatory state which puts itself against the population through an authoritarian way of governance and the use of violence and corruption. A government which is also failing in its acting towards its citizens. On the other hand Haiti remains until this day at the mercy of foreign superpowers and international organisations, which are primarily serving their own interests.

It seems that ten years after the earthquake the rebuilding of the country mainly resembled a cosmetic operation during which the root causes of Haiti’s problems were not tacked by neither the Haitian authorities nor the international community. This is the reason that Haitians en masse take to the streets to bat tenèb, to fight against the darkness. Maybe the current rebellion of the oppressed will offer a new chance because it is not poor people who are Haiti’s problem.