More than 150 Haitian, European, Latin American, Canadian and African organisations
(trade unions, NGOs, associations, peasant movements, feminists, citizens), among them the COEH, are calling for a change in international policy towards Haiti.

In October 2020, the international campaign Stop silence Haiti was launched! Where do we stand, eight months later? All the abuses, violence and injustices denounced in this appeal have worsened. Poverty has increased, hunger affects more than 4 million people, kidnappings – coupled with rapes – have multiplied, and armed gangs have further extended their power.
Widespread insecurity affects all segments of the population, further compromising access to basic social services, including education and health. 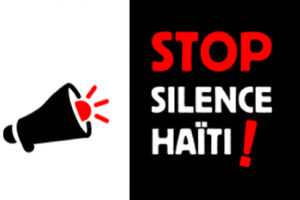 There has been no judicial progress in the massacres – twelve massacres have been recorded since 2018 – and corruption cases, foremost among them, Petrocaribe, while new investigations, national and international, confirm the involvement and complicity of the power. The assassination of the President of the Port-au-Prince Bar Association, Mr. Monferrier Dorval, like so many others, remains unpunished. Violence and impunity feed each other, plunging Haiti into a vicious circle.

The deterioration of human rights and living conditions of the population is catalyzed by the political crisis. On February 7, 2021, the presidential term of Jovenel Moïse ended. But he refused to leave power. He intends to remain at the head of the state until a referendum –
prohibited by the Constitution – is held at the end of June and elections are held in September.

By doing so, and by inventing an attempted coup d’état to justify the retirement of three judges of the Court of Cassation – which constitutes (another) unconstitutional act – Jovenel Moïse has clearly opted for a strategy of “rotting” and consecrating the authoritarianism of his regime. Yet he continues to enjoy the support of the Core Group, in general, and the United States, in particular.

Please, continue reading the complete document, together with the names of all organisations that are supporting this campaign, here