Statement of the COEH: current crisis in Haiti is unprecedented 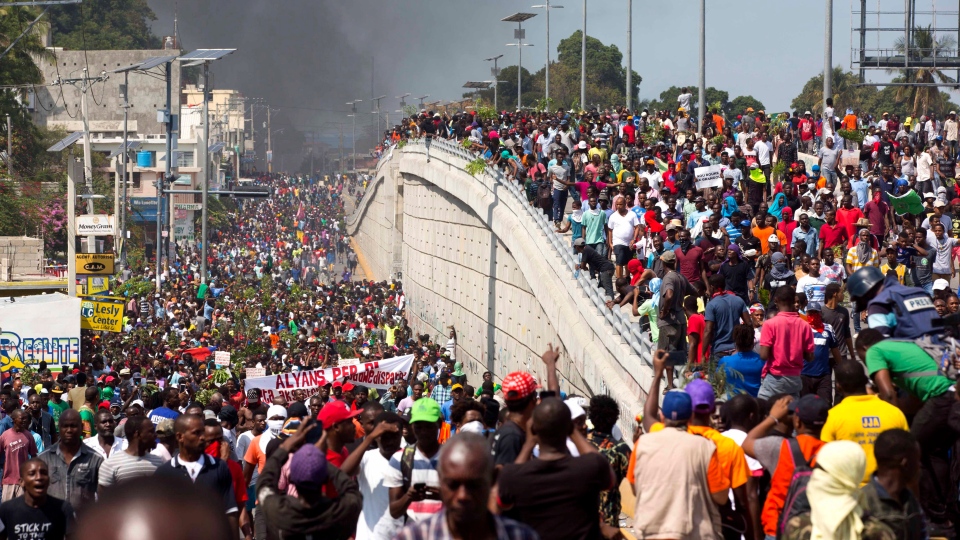 On October 4, the COEH (Coordination Europe Haïti[1]), on the occasion of its General Assembly, listened to representatives of the Haitian civil society informing the COEH about the increasingly unbearable situation in their country. The COEH wants to be the voice of Haitian men and women before the European Union and its member states. Thus, we take the liberty to give you a brief overview of the current situation.

For over a month, Haiti has changed into what is called a ‘locked country’, an almost total standstill of social and economic life: people are suffering from school closures, a lack of access to potable water, idling hospitals, a shortage of fuel, farmers without possibilities to transport their products, an economy that has arrived at a standstill and people who are unable to go to work. The poorest groups are suffering most from this situation. The country is experiencing an unprecedented crisis, where human rights are being violated daily. In fact, this crisis started already during the riots of July 2018 after a failed attempt of the government to rise the fuel prices and when the corruption scandal of the PetroCaribe funds was first being revealed…

The Haitian people and civil society organisations are blaming bad governing of those in power. Demonstrations are growing against a government marked by corruption scandals and ties with armed criminal gangs that are being supported by political people close to the powers that be. The fact that political figures have been involved in the planning of the La Saline massacre mid-November 2018, only days before a large demonstration, is a clear example of the climate of terror and of the various interests at stake. The primary victims of the country’s deadlock are the Haitian people, already suffering because of the increasing costs of living  and an economy at half mast, but continuing to show their courage and determination.

Other Haitian sectors, such as the Bishops Conference, the Conference of Religious Orders, the business sector, teachers, Haitian writers, are speaking out against the intolerable situation and are demanding of the president to take responsibility and to resign. The rebellion has grown these last weeks, with massive demonstrations on three consecutive Fridays: September 27, October 4 and October 11. The protestors say they will continue until the president has resigned.

For months, Haiti has become a country without a government. Since the forced resignation of Prime Minister Céant last March, President Jovenel Moïse has not been able to receive the approval of Parliament for a new Prime Minister.

The shameful sums of money mentioned in the corruption affairs that have been burdening the country over the last few years are causing a population living in increasing poverty to rise up more. The report on the Petrocaribe files published by the national audit office showed a huge, systematic and planned embezzlement of a large part of the 4.2 billion American dollars generated by this fund[2] between 2008 and 2018. The scandal gave birth to the movement of Petrochallengers who are demanding clarity regarding the utilisation of these funds and are insisting that justice must do its job, and that a lawsuit be launched against the people responsible of squandering the funds.

On the other hand, for months the International Community has been insisting in a dialogue between the parties. Despite futile attempts to start a discussion, the challenged organisations condemn the attempts of recovery and of silencing the popular grievances by the government in power.

Much has been promised but after having been two years in power very little has been accomplished, taking into account the urgent needs of Haiti. The initial trust of the people in this government has run out. At the end of this year, the terms of the members of parliament as well as of two third of the senators will end. This will permit the president to govern by decree. According to the constitution, elections should take place in October of November of 2019.  But the electoral law, that has been waiting for approval by Parliament for over a year, has not yet been discussed or put to a vote. The past two years the government has functioned without a budget approved by Parliament.

Our partners in Haiti are astonished by the silence in Europe.

They wonder why the International Community and especially the Core Group[3] continue to support the president, in spite of numerous human rights violations and countless dead and wounded since the start of the demonstrations. The neglect and indifference of the international community, of the media and of the Western public opinion raises many questions.

Although the different civil society movements and the opposition still have difficulty to find common ground on all issues, they do agree on a common basis for demands: resignation, voluntary if possible, of the president; creation of a transition process and a dialogue aiming at a transformation to a democratic government system, that is transparent and non-corrupt; to put an end to the impunity of the corrupt perpetrators; and some of them have added the creation of an emergency plan in view of the looming humanitarian crisis.

The COEH has a duty to transmit this message of our Haitian partner organisations, for whom an end to the crisis is impossible without the departure of the president, the installation of a transitional government as well as the organisation of a national conference to discuss a profound reformation of the state and the formulation of conditions that are crucial to hold transparent and open elections.

As COEH we call upon the EU institutions and its member states to be really responsive to the legitimate anger of the Haitian people, and no longer remain impassive facing the smouldering humanitarian crisis. The EU should truly engage in interaction with the Haitian civil society and support the Haitian people in developing a roadmap and conversation with the political actors, as well as contribute to the installation of a transparent and non-corrupt governing system and a constitutional state in order to be able to respond to the basic needs of the Haitian people.

[1] The CoEH wants to represent the voice of its partner organisations of the Haitian civil society before the European Union and member states. www.coeh.eu

[2] The Petrocaribe fund, created by Venezuela in June 2005 and joined by Haiti in April 2006 during the government of Préval, is a fund that consists of benefits over the deliveries of oil at a preferential price by Venezuela and sold by the Haitian state at a normal market value. The benefits were meant to contribute to development projects in the country.

[3] The Core Group (consisting of the Special Representative of the General Secretary of the United Nations, the ambassadors of Germany, Brazil, Canada, Spain, the United States of America, France, the European Union and the Special Representative of the Organisation of American States) was established in 2004 in order to promote a dialogue with the Haitian government and to contribute to more efficient action of the international community in Haiti.