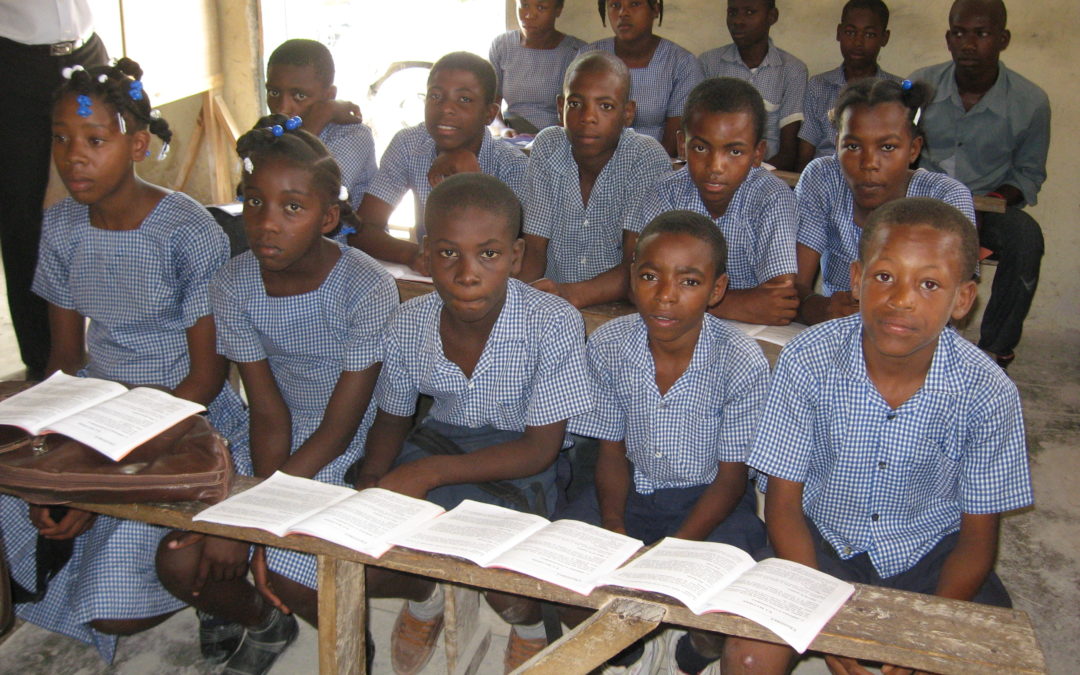 Just recently – June 2017 – the Akademi Kreyòl Ayisyen (AKA) proposed a modified orthography for Haitian Creole. Taking the currently used 1979 alphabet as a starting point, the Academy of Haitian Creole presented nine recommendations for further standardization of the orthography. The ultimate goal being to put Haitian Creole even more to the front as Haiti’s main language of instruction in schools.

The importance of this effort is illustrated by Michel DeGraff, professor of linguistics at the Massachusetts Institute of Technology (MIT) and advocate of native-language instruction. Explaining the importance of using the students’ vernacular language as medium of instruction, he states: “Research has shown that we learn best in the languages we speak most fluently. In Haiti at least 95 percent of the population is fluent in Kreyòl only. The use of any other language of instruction is a recipe for academic failure. This failure becomes a national tragedy when it repeats itself generation after generation, with Kreyòl-speaking children being taught in French”(interview MIT News, 2015).

Haitian Creole: the sole language that unites all Haitians

The Akademi Kreyòl Ayisyen (AKA) was founded in 2014 as a national institute to promote the use of the Haitian Creole –  especially as langue of instruction in schools – and to ‘guarantee the linguistic rights of all Haitians regarding everything related to the creole language’ (www.akademikreyol.net). The organization’s mission is deeply rooted in the 1987 Constitution (article 5), in which for the first time in Haiti’s history Haitian Creole was acknowledged as being the sole language that unites all Haitians and as official language of Haiti, alongside French. This was a major change compared to the previous 1979 Constitution which still considered Creole to be subordinate to French and classified French as ‘language of instruction’ and Creole only as ‘educational tool’. Hebblethwaite (2012), a linguistics professor at the University of Florida, states: “Creole was at the time constitutionally defined as a means to French but not as an end in itself.”

However, despite the changing perspective on the value of Haitian Creole as phrased in the 1987 Constitution, the implementation was complicated and reality turned out to be harsh. Hebblethwaite notices that “While the 1987 Haitian law encourages the promotion of Creole, the practice of French medium of instruction continues and many Haitian school children are subject to disproportionate corporal punishment and humiliation when they are caught speaking Creole on school grounds”(2012). The date of foundation of the Akademi Kreyòl Ayisyen is a witness of this slow pace of this process of change as well. The foundation of an institute like AKA was already envisioned in 1987 Constitution. It took 27 years to become reality. Of course Haiti has gone through a period of intense political turmoil and highly environmental pressure the past thirty years. Educational language policy – and language policy in general – may for these reasons not have been high on the political and societal agendas.

Creole during the colonial period “a weak and confusing language”

However another perspective needs to be considered in order to understand the slow progress made in embracing Haitian Creole as main language of instruction in schools. Haitian Creole has historically been qualified as an inferior and insufficient channel of communication. Wide-spread and tenacious negative linguistic attitudes have limited the use and development of Creole as language of instruction. Early accounts of the Creole language have set the tone for future appreciation of Haiti’s vernacular language. During the colonial period the French considered the nascent  Creole language as a childish form of French. Girod de Chantrans for instance, a military engineer who visited Saint Domingue in 1782 and who generally expressed quite positive feelings about the slave population, held the Creole language to be “a weak, underdeveloped and confusing language.” He considered Creole as “an imbecile jargon only apt for people with deficient intelligence” (Voyage d’un Suisse dans différentes colonies d’Amérique). The influential Moreau de Saint-Méry, who wrote extensively about Saint Domingue around 1800, expressed himself in similar words: “It’s a kind of ill- formed French” (Description topographique, physique, civile, politique et historique de la partie française de l’isle Saint-Domingue). This depreciation of Creole went hand in hand with the exclusion of educational opportunities for the slave population. Learning to read and write was a no-go area for the slaves. The ‘spelling book’ was forbidden, as Jean Fouchard, the 20th century’s journalist and historian, has illustrated so accurately in his book ‘Les marrons du syllabaire’.  “Ignorance is a weapon in the hands of despotism”, wrote Girod de Chantrans criticizing this colonial approach towards education. Hebblethwaite (2012) connects this past to our present: “French colonists in the French Antilles viewed European languages as superior to African and Creole languages which were judged as ‘inferior’, ‘unready’, ‘degenerate’ and these ideologies have undergone no break in transmission from the days of slavery until the present.”

In his research Michel DeGraff has clearly shown that Haitian Creole is perfectly usable as a language of instruction for all school subjects on all levels. There are no linguistic reasons to consider Creole less qualified as language of instruction than any other language. Using Creole – both the teacher’s and the student’s mother tongue – improves the quality of teaching and will in this way reduce dropout rates and increase students’ performances. Research from all over the world shows that education in a first language accelerates the social, economic and intellectual progress of societies.

Of course adequate teaching materials need to be developed and teachers need to be trained – not only in a technical (educational and pedagogical) way, but in orienting their mindset towards a more embracing attitude towards Haitian Creole. Linguistic pride and self-esteem lay the foundation for students’  future success in second language learning. The implementation of the transition from vernacular (language 1) to foreign language (language 2) will require special attention. Teachers need to be trained as (foreign) language teachers and need to be bilingual themselves (which they aren’t most of the time nowadays). Anyway emphasizing the domination of Creole in the classroom doesn’t imply the exclusion of a second language, like French, English and Spanish. The struggle for more Creole in classroom is an inclusive, not an exclusive one. As such it represents the struggle of Haitian society at large. Ochan pou Akademi Kreyòl Ayisyen! We pay our respect to the Academy of Haitian Creole.

Marcel Catsburg is a senior lecturer in (international) organizational communication. He worked in Haiti from 1991 – 1996 as a communication advisor for a local NGO.He writes about Haiti on his website www.haitiinfo.nl