Is the agrarian sector on the right path? 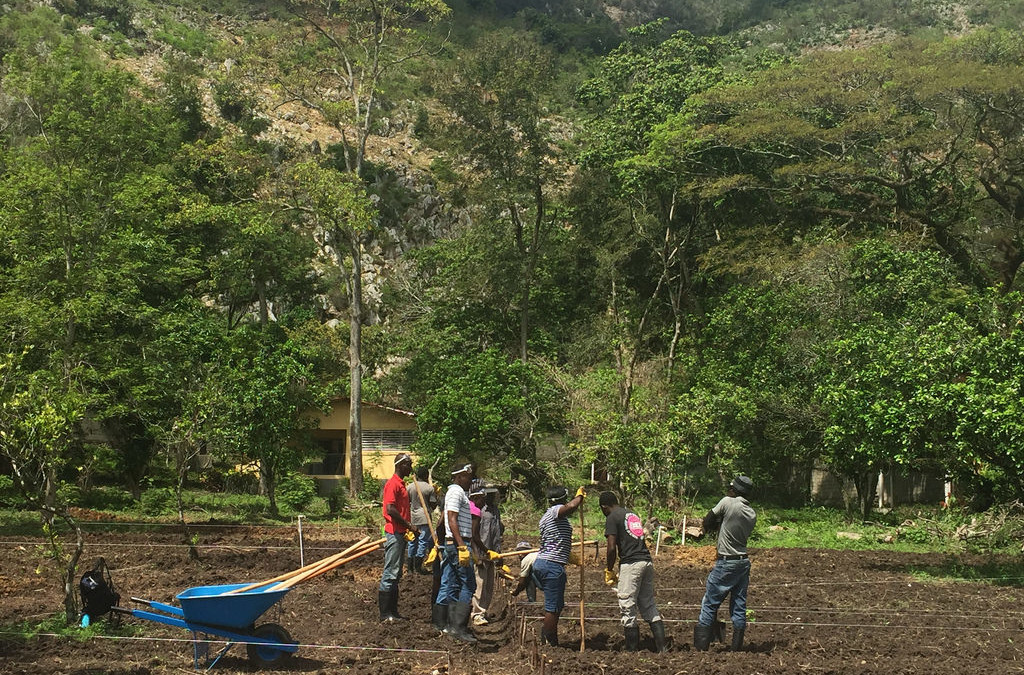 Hurricane Matthew is still very present in our minds and we were afraid it would cast a shadow over the latest National Meetings of the CHF in Guipry-Messac in Bretagne. But it was totally the reverse due to the presence of several Haitians, representatives of the social, political and economic life of the country. Thank them for having shared their initiatives with us and enriched the debates which were rampant and productive, about education, citizenship, environment and agricultural development… The information they shared with us invites us to reconsider our aid approach towards Haiti. They have proven that we from now on not only move from assistance to partnership but that we have to take a step back in order to let the Haitians act, create and evaluate autonomously their possible needs, organizational, technical or financial – while we remain present to offer them our support as allies.

With this in mind we have chosen to share with you today something that could help to turn around the agriculture, the livestock industries, using the presentation of Michel Chancy, founder of Veterimed, Secretary of State for animal production from 2008 until 2016 and professor at the Faculty of Agricultural and Environmental Science at the Quisqueya University (uniQ) of Port-u-Prince.

Agrarian sectors on the right path?

Let us start with the livestock sector. The national beef production covers 95% of the demand. The number of cows in Haiti is about 1,200,000, that of goats between 2,5 and 3 million, and of pigs around 1 million. [1] Animal husbandry is therefore an important source of income for the small farmers. These animals are the patrimony of 1 million rural families. The problems are caused by the infrastructure: a lack of dairy factories, the absence of control by the authorities over slaughtering, and the importance of robbery of animals.

Once aware of this, the Ministry of Agriculture, Natural Resources and Rural Development (MARNDR) in March 2011  embarked on discussions with several national institutions (the ministries of interior and of local authorities,  of justice and public security, of industry, of public health and population, the national police, the national federation of CASECs), NGOs of the animal husbandry sector and associations of veterinary agents, the national federation of Haitian milk producers (FENAPWOLA), etc.

As a result, in 2013 a SIB (sistèm idantifikasyon bèt yo) or animal identification system was set up. The review carried out in June 2016 was positive: in every commune veterinary agents had been recruited and trained to carry out the identification process. Approximately 80% of the cows has been identified. the cows received tags in their ears and a booklet for which the farmers paid a fee of 35 gourdes during the campaign and actually of 110 gourdes. All information about the animals and their owners are registered in a data base which can be consulted on the internet.

The fees of the farmers amounted to more than 35 million gourdes. These are used to pay the veterinary agents, the data entry operators, the programme managers and the renewal of the stock of identification material.

Other financial means were also mobilized: the National Treasury and the Inter-American Development Bank (IDB) financed the purchase of the initial stock of inputs (tags, booklets and vaccines) and certain equipment such as solar-operated refrigerators to store the vaccines in all of the 140 communes in the country. In consultation with the local authorities approximately 300 community-based veterinary agents have been contracted as supervisors at all the communal slaughterhouses. This system drastically reduced the robbery of cows as well as the impunity of such crimes.

The milk industry has been set up with approximately forty organisations of milk producers affiliated to FENAPWOLA (National Federation of Haitian Milk Producers) established December 20, 2007. You will find the announcement of its creation on the webpage of Alterpresse.[2] Many partners are actively supporting the development of the dairy sector, a strategic sector for the Haitian State.

Milk is a perishable good, cows give milk during 6 to 7 months and the dairy factories sometimes have difficulties to respond to the demand of consumers. They are unable to stock their production. They need support which can be given thanks to reinforcement of the marketing logistics of local milk which only covers 20% of the consumption. This project, presented by Michel Chancy, will be supported by the Collectif Haïti de France.

The goat production sector has allowed a prompt action after hurricane Matthew. A solidarity appeal was launched by a coalition of six Haitian institutions and associations to enable farmer families to reassemble part of the lost herd. The coalition consists of: Quisqueya University, Veterimed, Notre Dame University, KORAL, the National Network of Veterinary Agents (INTERVET), and the National Federation of Haitian Milk Producers (FENAPWOLA), which had already a strong tradition of collaboration.

With two grown goats ready to reproduce a family may have 4 to 6 goats from year one. Previous experiences inspired by the traditional system of “gardiennage” have shown that a year later the ones that had received two goats had been able to donate two goats to another beneficiary, an activity that maintains a sense of responsibility and solidarity. By the second year, a family that has increased their herd with 3 or 4 goats may expect annual earnings 3 to 4 times more than the initial investment. The programme has been initiated in several regions and aims at the distribution of 10,000 goats to 5,000 families. The project is ongoing and you are invited to participate. [3]

The poultry industry is a long way from enabling the supply of the country. The majority of eggs is being smuggled into the country from the Dominican Republic where since 2008 the virus AH5N2 of the avian flu that is transmitted from bird to bird but which is not dangerous for man. The Haitian authorities think there are always risks that infected Haitian poultry might pose a danger for the national chicken production. Most of the chicken meat is imported from the United States. Partial recovery of the national market is in progress. For example, during the past five years production has increased from 1 million eggs per month to nearly 8 million (from 3% of the national consumption to 25%). This increase allows a reduction of dependence of import. In order to continue, one should fight smuggle and diseases should be tackled with vaccination of the traditional poultry which will increase the revenues of the rural population.

With regard to aquaculture the natural supplies of sea fish are diminishing all over the world and as such fish farming is a growing opportunity even in Haiti. Thanks to several public and private investments, between 2011 and 2014, the annual production has grown from 200 MT (Metric Tons) to 550 MT. The goal is to reach in five years a yearly production of 10,000 MT. Haiti has a lot of potential where it concerns the development of aquaculture and fish in lakes. After Cuba, Haiti has the largest lake resources in the Caribbean.

The fruit industry has been developed by ANATRAF (National Association of Fruit Processors). Fruit processing is based on the family production. 80% of the work is done by hand and the use of inputs such as jars and imported white sugar does not permit immediate profits. For the local market better adapted packaging is needed: smaller and cheaper. The formal market, directed at the shops in town poses demands that the small workshops are not always able to meet.

One last projected industry: sugar. The production of sugarcane has all but disappeared in Haiti. It would be the production of completely brown sugar, called powder rapadou, in small units. The production is easy, little investment is needed and it can be stored easily. The sugarcane culture is a good contribution for the livestock as it produces a broad range of food: the top leaves (amarres) are available during the dry season when their nutritional value is highest… It’s like a stand-by fodder provision that does not need to be stored and that suites the cattle.

The cocoa industry is being implemented. In the Grand’Anse and in the north of the country cooperatives are functioning (FECCANO, linked to Ethiquable), but the production is not much appreciated even though Haitian chocolate is of good quality.

With regard to the coffee industry, a National Institute of Haitian Coffee (INCAH) has been established by coffee planters’ associations and NGOs active in the coffee sector in Haiti.

So there is no lack of projects. The cow identification system is like a bridge that can create clusters, links and that might help the decentralisation process. For Haiti, “the most important challenge is to pass from a mentality of assistance to one of creator.”

[3] Details of the operation can be found on theinternet site of Veterimed: www.veterimed.org.ht/new/IMG/pdf/Soutenir_relance_elevage_Haiti.pdf