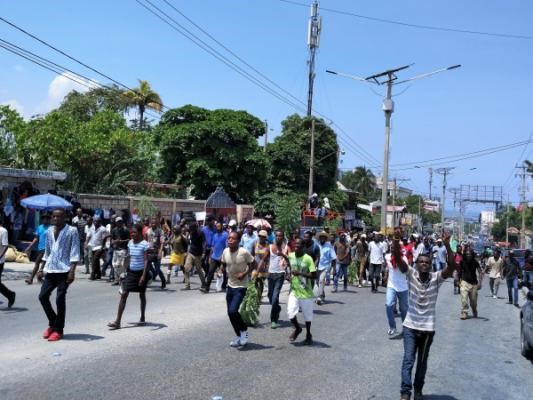 Pieter Thys is cooperant of the Belgian NGO Broederlijk Delen and has been working in Haiti for several years. Mid-September he wrote for MO Magazine the following article on the national budget recently approved by the Haitian parliament. Today, early October, the situation continues to be tense and confusing: October 2, public transport unions went on strike, while other unions of the same sector cancelled their planned strike, as according to their spokesperson government agreed to a number of their demands. It has been three weeks since strikes and protests took over the country and so far no end is in sight as president Moïse seems not to be willing to give in.

Two weeks ago, the parliament of Haiti approved the national budget for the coming year. This budget provoked disbelief, bewilderment and most of all rage among the Haitian population. Not only is the national budget at right angles to the social and economic reality of the country, the government also seems determined to fill state coffers by demanding astronomical taxes from the already impoverished population.

On the eve of Tuesday September 12, the Haitian capital Port-au-Prince gave the impression of a battlefield. The tarmac was blackened by burned tires, flung about rocks were the silent witnesses of confrontations between demonstrators and police forces, and cars had been reduced to wrecks.

When the minister of Economy and Finances, Patrick Salomon, presented his proposal of a new finance act to parliament, the document generated mainly disbelieve. The proposed national budget did not in any way appear to correspond to the social and economic challenges the country is facing. For example, the public health system, completely paralyzed because of an acute lack of operating budget and continuing strikes of the underpaid medical staff, will receive less funds than the two chambers of parliament. This means that the government cares less about the health care services of more than 10 million Haitians than about the salaries and operational costs of 146 Members of Parliament. In addition, President Jovenel Moïse has given himself a personal portfolio which exceeds the budget of the judicial authorities, in a country where approximately 80% of the inmates spend months and up to years in overcrowded prisons waiting for their verdict because of an agonizingly slow and corrupt legal system. The national budget also does not include any plans to assist the more than 60.000 victims of the January 12, 2010 earthquake, still living in camps, nor does it take any measures to help the thousands of families that lost everything when hurricane Matthew struck the island last year. Haitian civil society organisations, among them the partners of Broederlijk Delen, qualified the national budget as ‘criminal’, and are using all kind of communication media to inform the population about the new finance act.

The proposed measures to increase the income of the state show a similar denial of the socio-economic reality of the country. More than 6 million Haitians are living below the poverty level and according to conservative estimates over 40% of the population is unemployed. Notwithstanding the government wants to increase the state coffers  by raising the fiscal pressure on the already impoverished people. In order to obtain official documents, such as a passport or a driver’s licence, a tax declaration has to be presented. Also, the costs of these documents will increase relentlessly. Every year, thousands of Haitians are leaving their home country, hoping for a better life elsewhere. By way of the new finance act the Haitian government wants to demand of the over 2 million Haitians who left the country the payment of a flat-rate tax of 10,000 gourdes (130 Euro), even though the state denies them the right to vote. Earlier this year the workers of the textile industry were on strike for weeks on end demanding a twofold increase of their miserable minimum wage of 300 gourdes (4 Euro) a day. The reaction of the government was an raise of 50 Haitian gourdes (65 eurocent), the equivalent of 2 small bottles of water. The fuel prices have increased this year also, causing the costs of public transport, everybody’s means to get to work, equally to rise…

What’s more, the Haitian government wants to make its people pay for the debt Haiti owes to Venezuela through the controversial management of the so-called ‘PetroCaribe Development Fund’. Since a few years Venezuela has been delivering cheap oil to the Haitian state, that could invest the profits of the selling of the oil into a fund – the PetroCaribe Development Fund – to finance social and economic projects. However, corruption and bad management of the fund changed this opportunity into an enormous debt, its repayment representing one of the largest items of expenditure next year…

A stich-up between government and parliament

When the proposal of the finance act was approved by the Chamber of Representatives without any debate and apparently unanimously disbelief changed into bewilderment. In the Senate one or two senators tried to withhold approval by ripping apart the report of the Finance Commission and disturbing the voting moment by singing and ringing bells, but in the end also the Senate, with a large majority, approved the new act. Clearly a stich-up between government and parliament as its members turn out to be the ones who will profit most from the national budget.

Protest in the streets

Two weeks ago the storm finally broke. After the disbelief about the content of the new finance act and the bewilderment over its hastily approval by the two chambers of parliament, the people were infuriated and finally took to the streets to show their disagreement with the anti-social politics of the new government in general and, more specific, with the approval of the new finance act. The enraged Haitian people want to force the government to scale back the finance act and to formulate a new, more just proposal. The turmoil of September 12 was followed by a general strike on Monday, September 18 and new protests after that. Before he left for New York to attend the General Assembly of the United Nations, president Jovenel Moïse said he would publish the act unchanged in the Official Journal…