Haiti: Promotion of agroecology as a strategy to achieve food sovereignty 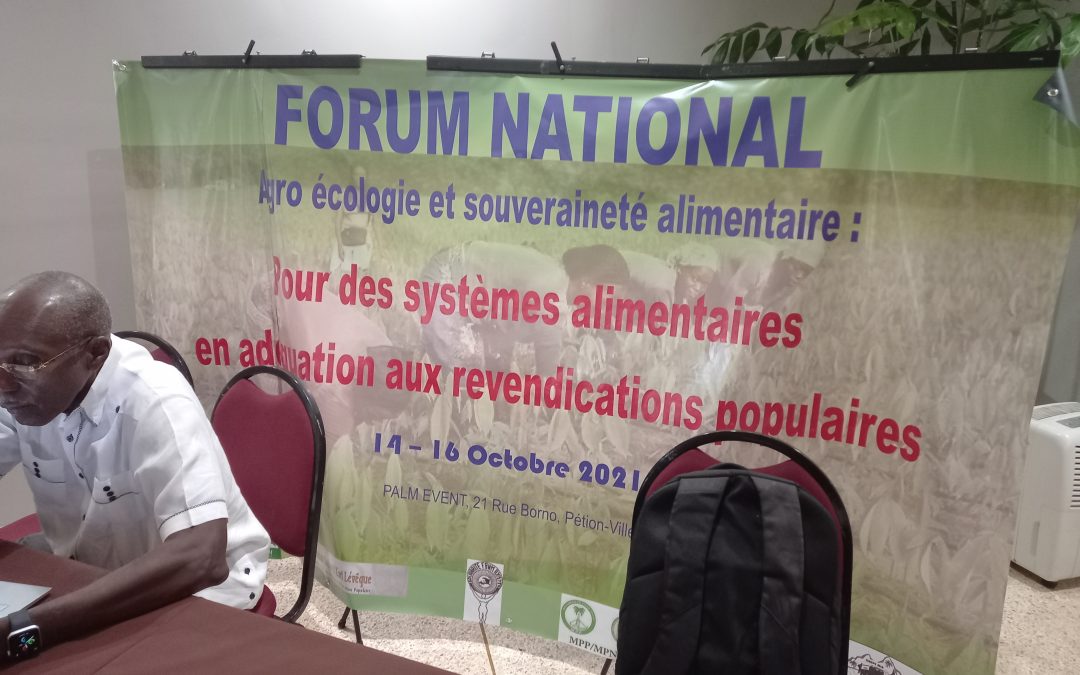 Despite a gloomy situation characterized by the difficulty of moving from one place to another due to fuel shortages and insecurity, more than sixty representatives of peasant organizations, labour unions and supporting NGOs met at a hotel in the Haitian capital Port-au-Prince, on October 14, 15 and 16, 2021, to reflect on the need for a large movement in favour of food sovereignty in the country.

Under the theme “Agroecology and food sovereignty: For food systems in line with popular demands”, several speakers presented themselves to explain to the assembly the big difference between the industrial system of food production which consumes a large amount of resources while causing serious damage to the environment and human health and that of peasant agriculture, unfortunately looked down upon but which actually provides more than 70% of the world’s food.  “Originally, agriculture aimed at providing good and healthy food for human beings, using simple techniques and encouraging solidarity. But the agricultural industrial model that they want to impose on us is primarily interested in profit and wants to grab all the available resources (land, water, seeds) for the benefit of a few capitalists who have only one goal : get richer,” stressed Chavannes Jean-Baptiste, leader of the Papaya Peasant Movement, one of the main peasant movements in Haiti and co-organizer of the meeting.

Chavannes Jean-Baptiste advocates for vast alliances between towns and the countryside, between producers and consumers in order to fight the invasion of imported products, which are often harmful to health, in favour of products from family-based agriculture which should at the same time  benefit from scientific research available to improve production.

Speaking in turn, Camille Chalmers of PAPDA denounced the last world summit on food systems organized by the United Nations in September 2021. This summit, he noted, was controlled by global groups that want to control the resources available for agriculture. He criticized the world hunger scandal with more than a billion people food insecure while the means are available to feed more than double of today’s population of the planet. Chalmers believes that peasants everywhere should be aware of this scandal and calls for a demystification of some ideas that pretend that it is the agricultural industrial model that feeds the world. “It is not industrial agriculture which unfortunately controls 80% of agricultural land that feeds the planet today, but rather peasant agriculture which barely has 20% of agricultural land and which provides more than 70% of the food“, Chalmers explained.

Showing a great awareness of the issue concerning food production in the world and in Haiti, the peasant delegates present at the meeting did not miss a moment to praise the benefits of agroecology as a strategy, according to them, able to help Haiti to regain its food sovereignty.

Rosemène Valdemar is a member of the National coordination of Tèt Kole Ti Peyizan Ayisyen. She talked to us about the increasing importance of agroecology within her organisation. “We are training our members in agroecological techniques so that they can produce good quality food while protecting the environment.”

She deplores the lack of attention paid by the Haitian state to the work of women in agriculture. “Peasant women sow, weed, harvest, prepare food for the family, go to market to make products available to different towns and communities. But the government doesn’t care what we do. We do not have good seeds, no supervision, no economic means to farm, ”she laments on the fringe of the celebration of the International Day of Peasant Women on October 15.

“In the North West, where I am the coordinator of a peasant women’s movement, we are fighting against the grabbing of our land. We demand the preservation of our land so that we can produce our own food adapted to our culture and our eating habits. We demand a land reform in good and due form so that peasant women have access to land ”, claims for her part Alta Prophète, another peasant woman, member of the National Peasant Movement Papal Congress (MPNKP). She says she is counting on agroecology as a motor for agricultural development in Haiti.

During these three days on agroecology and food sovereignty, many reflections focused on the threats to agricultural land in Haiti, not only by the grabbing movement that began in the Northeast and in the Artibonite, but also by mining projects. According to a speaker on the subject, mining companies already have more than 40 mining licenses in different parts of the country and are only waiting for favourable conditions to start work. He called for citizen vigilance to avoid the development of these projects which will have disastrous consequences on peasant agriculture and on food sovereignty.

For her part, a representative of SOFA (Solidarite Fanm Ayisyen) presented the fight waged by her organization since the former Haitian president, Mr. Jovenel Moise had decided to include the 13 hectares of the organization’s farm school among the 8,000 hectares he had decided to give as a gift to a businessman for a project in Artibonite with Coca Cola. For his part, David Tilus of GAFE (Francophone Action Group for the Environment) presented to the assembly the “National Pact for an Ecological and Social Transition in Haiti”, and encouraged those present to take action so that the ideas proposed by the Pact form part of the political debate and that this document be adopted as a public policy tool. Other collaborators from abroad also intervened via Zoom around the same subject, sharing their ideas and the struggles that are being waged around the world.

At the end of the forum, the participants adopted a declaration in which they made a commitment to come together for the construction in Haiti of a strong and articulated social and popular movement and to define strategies of struggle to defend the agroecological family-based agriculture in order to build the true foundation of food sovereignty in the country. They also pledged to show more determination to defend farmland for the benefit of peasants; to fight against all the grabbing of agricultural land, and all threats to the country’s food sovereignty; to set up and carry out a national training and awareness campaign modelled by agroecological family-based agriculture and the consumption of local products at all levels: gastronomy, clothing, accommodation, entertainment, music, dance and any other characteristic element of the culture and traditions of the Haitian people. They are also committed to defending local seeds and advocating for investments that can meet the challenges faced by peasants in strengthening ecological family-based agriculture. For more details, see the text of the final declaration.