Since July 2022, the Haitian population can no longer find fuel in gas pumps, but instead at high prices in the streets. This problem, added to so many others, including traffic difficulties in the southern part of the capital for over a year now, growing insecurity, the arrogance of armed groups who kill with impunity, kidnappings, etc., affects all social strata and all regions of the country. It is in this already difficult context that the government announced, on September 14, a new rise in petrol prices, some more than 100%, with the argument that the State can no longer continue to “subsidize“. This decision has inflamed the already breathless population that practically does not benefit at all from state services and has brought them out into the streets. Everywhere in the country, in the capital, and in the provincial towns, people demonstrated demanding the withdrawal of this measure and rejecting this kind of governance which completely lacks social sensitivity. There have been robberies, looting and fires in businesses and in public and private offices. Some police interventions resulted in deaths and injuries.

Haitians and all those who closely follow the news in Haiti were surprised to hear on September 18, 2022, on the France 24 channel, a statement by the Secretary General of the United Nations, Mr. Gustavo Guterrez, qualifying as armed gangs all those who demonstrate in Haiti against the decision of Mr. Ariel Henry to significantly increase the prices of petroleum products and taking a firm stand against any pursuit of “subsidization” of this essential product. In an speech to the nation made the same day, the Haitian Prime Minister went in the same direction.

For his part, Mr. Juan Gonzalez, Senior Director of the National Security Council for the Western Hemisphere and special assistant to President Joe Biden, speaking on Monday, September 19, 2022 at the American Institute of Peace based in Washington, D.C. , declared that the protest movements which are multiplying in Port-au-Prince, and in other cities of provinces in Haiti, would be supported by powerful economic actors (without naming them) who risk losing a lot of money if the Haitian system is reformed.

The statements of these senior figures have further irritated the Haitian population and nationwide people have decided to increase their resistance to make the international community understand that the Haitian people exist, that they are fed up with this degrading situation in which they are floundering and that they are determined to show the whole world that they are fed up with all that. If it is true that there are armed groups that have been exercising terror against the population for several months with complete impunity, there is also a population that is suffering, who are crying out for help and who find no answer. These people are today in the street to say NO, against insecurity, against misery, against the increase with more than 100% of the prices of petrol products, without any consideration for their suffering, under the pretext the state coffers are empty.

Political and civil society leaders have disapproved of these statements, calling them a lack of respect for the population and a lack of consideration for the misery that surrounds the Haitian people. Everywhere people are wondering how an organization like the United Nations, with all the means at its disposal, has shown itself to be so little informed about the Haitian reality. Some are thinking that it is a question of bad faith to clear themselves of their responsibility in the face of the deterioration of the situation in Haiti and to prepare for unpopular decisions to come, including those of a military intervention, as advocated by certain countries, including the Dominican Republic, the closest neighbour. In any case, these kinds of statements, which can encourage serious human rights violations against a protesting population, contribute to increasing mistrust of the UN and its current mission in Haiti, BINUH. They endanger international organizations on the ground, including NGOs, and cast doubt on the role of the UN in the world.

In a public letter addressed to the Secretary-General of the United Nations, several Haitian organizations condemned Mr. Guterrez’s statements. “The struggling Haitian people were greatly surprised and amazed to learn that you have broadcast, on the France 24 channel, with regard to their current just and legitimate protest movement, a set of false information that is subject to throwing confusion, to criminalize, to discredit their struggle for a sovereign, just, livable Haiti. Contrary to your assertions, these popular protests are part of a struggle for a Haiti liberated from suffocating foreign interference, from gangsterization, from this extreme and constructed misery and from an anti-national, illegitimate, criminal political regime 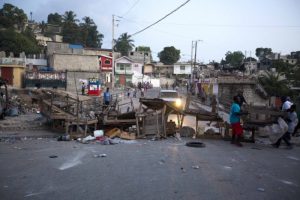 established by the Core Group who is part of the UN. This puppet political regime, operating under the dictation of the International Monetary Fund (IMF), has just stabbed the people by the decision to increase by more than one hundred percent (128%) the price of petroleum products. A price that has already suffered steady increases during this past year causing prices of basic necessities to double and triple in some cases“. (Excerpt from this letter signed by several Haitian organizations).

The debate was not even over when the Minister of Foreign Affairs of Haiti, Mr. Jean Victor Généus plunged the knife into the wound by making another equally shocking statement before the Security Council of the United Nations and which contrasts drastically with the reality on the ground. “As I speak to you, I am able to announce that, with the exception of a few isolated cases, the situation is generally under control and calm has returned to several parts of the country,” he said while reading a text from Prime Minister Ariel Henry. Listening to this speech, people wondered which country the Haitian Chancellor is talking about when we consider what is currently happening in Haiti where roads are cut, demonstrations are organized daily throughout the country, the offices of public and private institutions have completely closed down, kidnapping is in full swing……

This new statement strongly out of step with the reality on the ground has upset more than one and provoked numerous comments in the media. People have wondered why all these fine people, including Haitian leaders, are making fun of the Haitian people? Five employers’ associations have qualified this speech as a diplomatic oddity and asked Prime Minister Ariel Henry to take it back because what he said to the Security Council in this speech read by his Minister of Foreign Affairs in no way corresponds to the calamities experienced by the people. Haitian. “The employers’ associations, signatories of the present, were flabbergasted by reading the official message carried by the Haitian Minister of Foreign Affairs, Mr. Généus, before the Security Council of the United Nations Organization, this Monday, September 26, 2022 …….”, wrote the employers’ associations.

What happened, clearly shows that at the highest level people are complicit in a vast lie about Haiti, hiding what is really happening there, while purposely amplifying certain aspects that support their own projects and ideas. For example, the all-out appearance of a well-known gang leader, Mr. Jimmy Cerisier (alias Barbecue) in one of the demonstrations, was widely publicized in the international media and quickly served as an argument to disqualify the demonstrations and protests. Fortunately, there are other sources and channels that can help spread alternative information. But this type of behavior is raising questions about the UN, its role in Haiti and the sincerity of all the nice speeches of this international organization which continues to promote a political, economic and social life imprinted of, among other things, Justice, Solidarity and Honesty.