Haiti : Increase of school disparities at a background of insecurity, Covid-19 and labour union repression 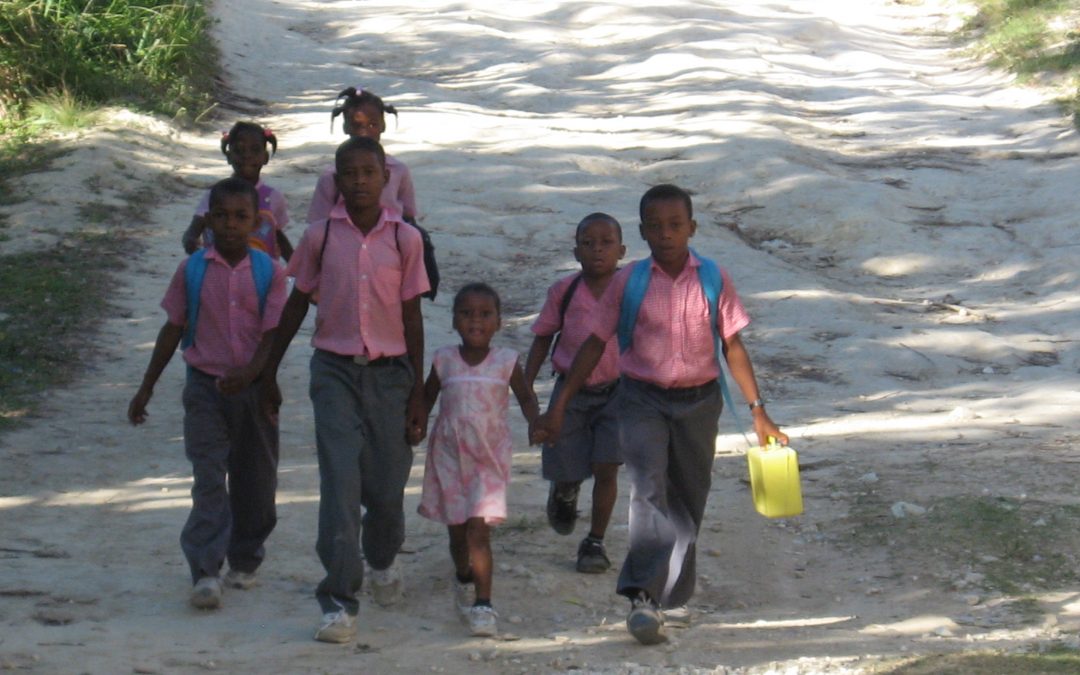 ]At the beginning of August, the ministery of national education has permitted the reopening of the Haitian schools that had been closed since early March after the first two cases of covid-19 had been identified. Since then, despite the heatwave, very early in the morning, you can see children dressed in their school uniforms on their way to school, while also several universities have reopened their doors. Everything seems to work fine, even though the protection measures to prevent the pandemic to spread are being observed less and less. But this is just how it looks from the outside. Many children have not really returned to school because their parents lack the means to pay the fees.

In Haiti, 80% of the education rests on the shoulders of the parents who have to bleed to pay school fees, transportation, food, supplies, etc., in order to enable their children to get an education. The state is taking responsibility for only 20% of the school system, which is then even in very bad conditions. The public schools are often on strike. Now and again the teachers at public schools are demanding the payment of their salaries, a rise of their salary, letters of appointment or improvements of the conditions they have to work in. Often,  due to a lack of management, teachers come and go as they please, and the children suffer the consequences as their school results lack behind.

When before you could find children of all social classes at the public schools, this is no longer the case. Increasingly, families who have even just enough means to spare will send their children to a private school. The state schools are being attended mainly by the poorest segments of society, and the quality of teaching at those schools keeps deteriorating. The social disparities are very clearly reflected in the Haitian school system.

Little by little, a kind of distortion can be noticed between the different school categories: the religious schools, the private schools for the wealthier classes, the community schools, the “little schools”, the public schools, etc. Some of them, often the ones managed by nuns and clergymen or by skilled teachers, stand out and are presented as models or “good schools”, next to the others, the great majority, qualified as “bad schools”.[1] Gradually, a kind of apartheid is getting installed in the Haitian school system, with schools at varying speeds. More and more, while the population is increasing, the state is abandoning its responsibility to guarantee the right to good education for all children without distinction.

Covid-19 and the socio-economic crisis that are rocking the country have increased these disparities up to the point where they are creating a lot of tension within the educational community. Numerous families have lost their jobs and income, or can no longer count on the remittances from abroad for their children’s education. Confronted with an unevenly functioning school year, many parents have decided not to send their children to school and prefer to wait for next term. While the more “lucky” children, who have access to internet and a bit of electricity, or who are attending highly demanding schools are getting ready to finish their “school year”, interrupted for several months.

On top of all this, the actions of the armed groups, with more than nine massacres in the working-class neighbourhoods of Port-au-Prince and in the Artibonite region this past year, have caused a complete deadlock of activities at many schools. Several schools were forced to close their doors being threatened by these groups, or because the teachers could not guarantee the safety at the school yard. While all this is happening, part of the people and the authorities are completely indifferent about the situation. The latter are preparing the official exams planned to take place in October, without worrying about the situation of numerous children who are forced to drop out because they lack the means or because of insecurity. The government has also not respected their commitment to give support to private schools so these can pay their teachers, many of whom have not received any (already meagre) salary since March.

Confronted with this situation and once the schools had reopened, the unions of the public sector launched several strikes demanding not only better working conditions, but also measures guaranteeing the protection of themselves and their students against covid-19, as well as more attention for the pupils in neighbourhoods with a high level of insecurity. Hence, despite the return to class, many public schools, both in the capital as well as in the provinces remain closed because of these strikes following the confinement period.

In reaction to these demands, the minister of national education, Mr. Josué Agénor Cadet, has fired teachers who are members of a union, or has appointed them to schools far away from their homes. These acts have only increased the tensions. Outraged, the students of public schools have taken to the streets demanding the presence of teachers in their classrooms, especially now that the official exams, which they have to take at all cost, are approaching, while no one is giving any consideration to their dire situation. In the aftermath, groups of students, denouncing the existence of a form of educational apartheid in Haiti, invaded a number of private schools that had reopened. They are taking it out mostly on religious schools, which, according to them, do not care about their fate. There was damage to furniture and the students who are attending these schools have become scared. As a reaction, the government has still hardened its tone by accusing the militant union members of pushing the students to disturbance.

« This educational system, the way it is operating in Haiti, can no longer hold”, said a wise observer. According to her, what is going on these days in the Haitian schools is an indicator of the level of decay of a situation of inequalities, of social injustice that cannot go on any longer. There is a pressing need for a general reform of the state. And one of the principal concerns of that reform has to be the organisation of an inclusive and of good quality school system.

[1] The “écoles borlettes”, which literally means a lottery school: the results are a gamble, without a guarantee to success.