Haiti : between an emergency plan and the need of profound reforms 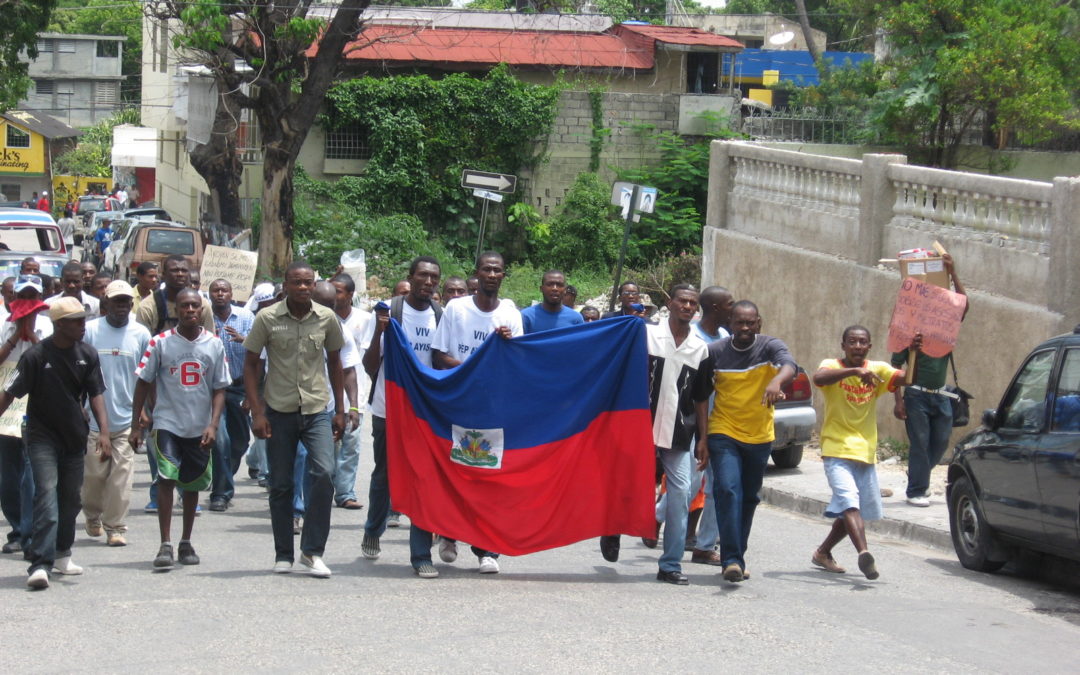 February 7, 2019 Jovenel Moise, the president of Haiti, was supposed to celebrate his two years in office. Traditionally, these anniversaries are marked by festive activities and the inauguration of projects, but this time the president announced that he has declared “a state of economic emergency”. A strange concept that is not based on any legal act and of which the content is not clarified at all. How far could this state of economic emergency go? Some opponents think the president is looking for a pretext to draw on the reserves of dollars in possession of the Haitian banks.

The few measures that were announced after the declaration of this economic state of emergency made people laugh: limited use of state vehicles, reduction of the provisions for telephone cards, the creation of soup kitchens, a complete halt to the granting of customs franchise, etc. Nothing was said about Parliament, yet the luxurious style of life of certain Members of Parliament is being openly criticised. Neither was any adjustment of the national budget announced, to sustain these measures, of which a number had already been introduced before, without any effect.

How can we understand this breakdown of the Haitian economy that caused the president to announce this « state of emergency » ? Since the beginning of 2019, Haiti has shown an accelerating deterioration on all economic indicators. Inflation has become generalized, the local currency is dropping further every day and the prices of staple goods have risen by up to 50%. The purchasing power of the large majority of the population is evaporating  like a puff of smoke. The budget deficit is being pointed at as being one of the main reasons of this economic crisis. In fact, since Mr. Jovenel Moise came into power, the Haitian leaders took on the bad manner to make costs for which no budget provision had been made at all.   For example, it has never been known where the money came from, that moved the caravan  « of change », introduced by the president to tour the country, together with his friends, at enormous costs. At the same time, the earnings of the country are dwindling  and international aid is diminishing. Combined, these factors have contributed to the devaluation of the local currency, which has dropped from 62 gourdes to the dollar at the beginning of 2018 to more than 80 gourdes a year later. The impact of this on the already precarious living conditions of the population are enormous. The BMPAB (the institution that is in charge of the sales orders) can no longer find the necessary dollars to pay the petrol bill. Ships  loaded with fuel pass several days in the harbour before they can unload, because they have not been paid.  On more than one occasion the country has brushed against the breakdown of supply.

In such a situation, the rebellion against the government that started last year has increased. The Haitian citizens have become very angry with a State that does nothing but waste their resources without offering them the basic services to which they are entitled. The report that was published by the Superior Court of Auditors about the usage of the Petrocaribe funds (funds which came from the Venezuelan oil program, selling oil at preferred prices) is a scandal. It reveals the extend of the corruption and the bad management of these funds which the people now have to repay. This observation of the failure of different institutions, including Parliament, that are supposed to defend the interests of the nation, have contributed these last days to a large movement in favour of a profound reform of the State. “The system that rules us does nothing besides creating misery and exclusion. We must therefore get rid of it. The State has to be reconstructed on a new foundation, and if it is necessary, the Constitution has to be revised”, are shouting numerous young people during demonstration that have increased all over the country since February 7.

But how should such a reform take place? Which power is capable of taking the lead? According to groups of the opposition, Haiti should organize a “national conference” to discuss its future. As a start, president Jovenel Moise should resign, as he is incapable to govern the country, according to these groups. Facing the growing tensions, a number of important economic actors have started to take a position. One of them has even asked the president to resign or to shorten his mandate in order to facilitate a way out of the crisis and to organize general elections.

While an important part of the opposition wants nothing else but the departure of the president of the republic, a number of people are a bit sceptic about the alternative: his possible replacement, as it will not be the first time that a president leaves Haiti under comparable circumstances. Once the storm has passed, the state authority that has always ruled the country will resume its powers, with of course new actors, but without any real changes. And little by little, the machine will start running again as before. Will it be different this time? What are the parameters to work with in order that this new mobilisation of the people will bear fruit? Here is an important task for the political actors in Haiti who form the opposition. Will they be able to make a difference and to find a way which will finally help the nation to rebuild itself on a new foundation?