HAITI : A REFERENDUM TO AGGRAVATE THE POLITICAL CRISIS

The current plans in Haiti to modify the Constitution are a serious threat to worsen the situation, instead of a way out of the crisis. In fact, Mr. Jovenel Moïse whose mandate as president of the republic of Haiti, according to many, ended on February 7, 2021, has declared war to the same constitution that he swore to respect when he was installed as president. He reasons that the country’s primary law, approved by an overwhelming majority after the fall of the Duvalier dictatorship in 1987, does not give the president enough power. Without any consensus, and no legal provisions, he has decided to change the constitution, violating the article 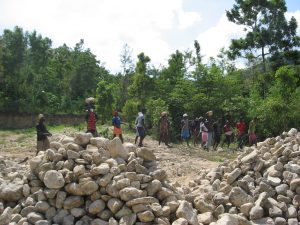 that is prohibiting the realisation of any referendum aimed at this Charter. This article was specifically added to end the common practice of politicians in Haiti to take off the constitutional straitjacket when they wanted to impose their own will to the nation.

To give some credibility to his project, Mr. Moïse has installed a so called « independent » committee to prepare a document. In this committee are assembled a number of well-known personalities who are willing to play the president’s game, among them a former president, Mr. Boniface Alexandre. Without any consensus or endorsement of the other powers, as is demanded by the Constitution, he has also installed an electoral council to which he has given the responsibility to organise this referendum while this is not the function of this kind of council. Of course, after thirty years and taking into account the evolvement of the context it is necessary to revise the constitution, and it is anticipated how to do this. But Mr. Jovenel Moïse has cast aside all the work done to amend the Constitution and has decided to make a new one, to his measure.

A first draft of his project is already available and the analysts who have read this draft consider it to be very repressive. Mr. Moise’s constitutional project is revoking a number of democratic achievements the Haitian people have fought for, notably the one to control the actions of men and women in power. It is changing the current political system, giving limitless powers to the president and to his ministers, who no longer have to be accountable  to the nation once they are in government. In the tumult, the project is skinning multiple independent and controlling institutions. With this kind of constitution it is goodbye to the legal trial about the Petrocaribe funds, goodbye to sanctions against the corruption of which Mr. Moïse is being accused and which has been the reason of so many demonstrations organised by the Haitian civil society during these pas years.

This initiative to change the constitution has been denounced by many international sectors. But Mr. Moïse turns a deaf ear and continues the path he took. All the while he is benefitting from the silence of the famous « international community », united in a platform of the diplomatic representations in the country, called the Core Group, which is playing a crucial role in the political decisions of the country. The European Union is the first to have recently and publicly announced that they will not financially support the referendum nor the elections. Also, the EU will not be sending an observation mission to Haiti. The other Core Group members are avoiding the question and prefer to talk about the conduct of the elections without ever explicitly mentioning the referendum. Through their mission in Haiti, called BINUH  (United Na 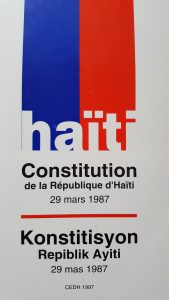 tions Integrated Office in Haiti), the United Nations is in fact supporting the process of change of the Haitian Constitution by giving technical advice to the drafting group, and financing debates, while the UNDP (United Nations Development Programme) manages the election funds, including those of the referendum, and the UNOPS (United Nations Office for Project Services) is in charge of logistics.

The implementation of this referendum, to take place on June 27, is coming with increased insecurity, kidnappings and armed gangs taking over control in many popular neighbourhoods, reservoirs of votes. According to political analysts this spectacular increase of insecurity is meant to intimidate the people making them swallow the pill. But already voices are being raised just about anywhere where the constitutional project is being presented : people are denouncing the plan and demanding the resignation of Mr. Jovenel MoÏse.

This referendum, if taking place at all, will have a very low turnout and might provoke violence in the country. The enforcement of the new constitution, that will come into force very soon in accordance with the provisions already agreed, remains very hypothetical. The stubbornness of Mr. Moïse wanting to change the primary law of the country will contribute to aggravate the situation, adding a new element to the political crisis, that of a disputed constitution.