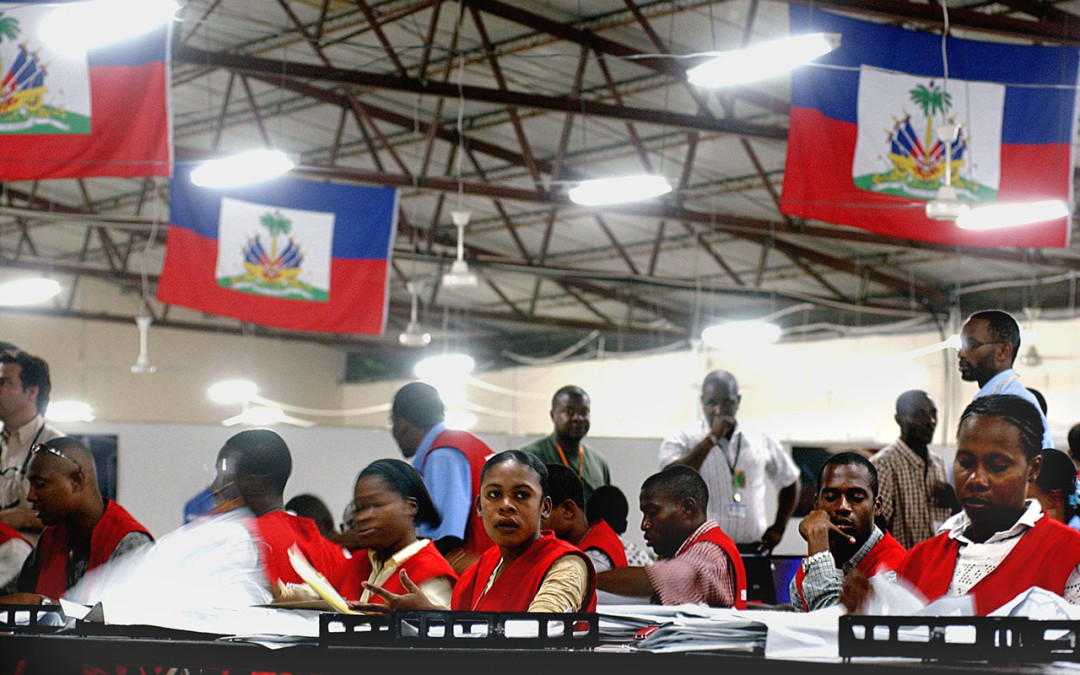 After the earthquake of 12 January 2010, the motto was ‘Building back better’. Six years later, at a time of elections that become more and more contested, it is now time to ‘Revote better’.

Postponed many times, accumulating to a delay of four years, the general elections in Haiti have been held in the second half of 2015. The second round of the presidential elections – in which the candidate of president Martelly, Jovenel Moïse, and the predestined successor of former president René Préval will confront each other – due to increasing pressure from the streets, have been postponed till 24 January 2016. On 7 February the newly elected President is presumed to take office. But an important part of Haitian civil society continues to ask for cancellation or revision of the first tour, which has been judged as fraudulent.

Errors, irregularities or fraud ? These three words define the current debate and disagreement about the ongoing elections. For the main opposition parties, like for numerous human rights organisations, the electoral process has been mortgaged by massive and systematic fraud. The government felt obliged to constitute, at the very last moment, an Independent Electoral Evaluation Commission (CEEI), which published its report the 3rd of January. Although its independence was immediately contested, the report states: ‘The elections of 25 October were flawed’. It also reveals that ‘close to two-thirds of the examined records of the polling stations showed 1 to 3 serious irregularities’.

Meanwhile, the US government, the United Nations and the European Union have not ceased to congratulate Haiti with holding elections, and urging Haiti to bring the electoral process to completion as quick as possible. When one is aware of the dependence of the Haitian government on its international donors, and knows that the elections are financed for 75% by them, one can better estimate the influence of such insistence…

For the European Union, as far as there has been fraud, the EU has minimized it. The EU regards them more as errors. For the EU, it seems that nothing can undermine the process and the official results. Clearly, these divergent appreciations and interpretations – between errors, irregularities and fraud – mix up technical with political dimensions. In an official press release, the EU said to have taken note of the recommendations of the CEEI for the rest of the electoral process. Taken note of the recommendations; not of the analysis: surprisingly more critical than the EU’s own analysis. It is true that they regard the voting of 25 October as a ‘success’  – almost lyrically – as a ‘breath of hope for Haitian democracy’.

In a recent interview, Jose Antonio De Gabriel, deputy head of the EU’s electoral observation mission in Haiti, heedlessly minimized the indications of massive fraud, as revealed by the unsigned or invalidly signed reports of the polling stations. According to him, it all came down to ‘childish, human error, caused by human fatigue, completely understandable’. The Haitians, those big kids, a bit lazy, very whiny, and too suspicious, have simply been too tired at the end of the day to correctly sign the reports of the polling stations. The bad logistics, though financed by the international community, the lack of capacity, and the lack of aptitude for intense work have done the rest.

The CEEI ’fortunately’ converges with the international community, disconnecting a denouncing analysis of irregularities from the recommendation that the second tour for the Presidential elections should a priori be held. Looking at the facts, there exists an objective alliance between the international community and President Martelly on two levels: they share the same neoliberal options – implemented in Haiti – and are the key, if not the only stakeholders interested in conducting this electoral process to an end. With or without the Haitian people.

The elections in Haiti have this in common with the post-earthquake reconstruction process, in which the USA, the EU and the international actors played the primary role ; at the same time as donors, as arbiters and as main recipients. While refusing to draw lessons from the past, persisting to deny their responsibility in introducing cholera to the country, they tend to isolate the evils which hit Haiti in the delays of Progress, the misunderstandings of Haitian culture, the DNA of a people or the fate of history.

Finally, for the international community the main problem of the elections, like with the reconstruction process, are the Haitians themselves. They remain outside, sidelined or a surplus. In reality, one should reverse the equation: today as yesterday, the hope for change comes from the Haitian people, while the international community is more the problem than the solution for Haiti.