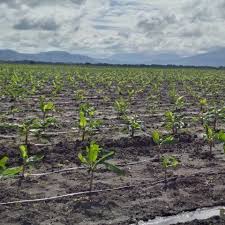 On 8 September 2015 a German freight carrier left the harbor of Cap Haïtien with the first bio-bananas for Hamburg, Germany. The expansion of the banana industry for export was a plan which had been discussed already for years. The plan was finally realized in September 2013, and a year later they started in Trou du Nord, in the Northeast of Haiti, with the first 400 hectares of a banana plantation that was intended to grow to 1000 hectares. In September 2015 the first bananas were harvested.

AGRITRANS is the name of the biggest (agro-industrial) agricultural project of Haiti, the first agricultural initiative in a free trade zone (FTA). FTA means that no taxes have to be paid, neither  customs or levies on investments or revenues for an extended period of time. It also means that 70% has to be exported and 30% is made available for the local market. The driving force behind the project is Jovenel Moïse (indeed, presidential candidate for the present governing party), together with the Martelly government and with support from the American project HOPE.[1]

The plantation stretches an area of more than 7 km. In a (serre) of 12.000 square meters the banana plants from Costa Rica are nursed, before being planted in the soil. A 6 meters deep pond with a capacity of 26,5 million liters of water has been constructed to irrigate the plantation. The projections are an annual production of 50,000 tons of bio-bananas. Thanks to collaboration with a European organization for certification, the export of the bananas could take off with Port International, a firm based in Germany.

Further investments are needed in the techniques for ripening, processing and packing the bananas for transport. An export terminal will have to be constructed as well. But that’s something for the months ahead, said Jovenel Moïse in February 2015. In the meantime, as we all know, he has become busy with other affairs. A new, energetic director has been appointed who further develops the project.

A new source of employment?

Expertise for the project had mainly to be recruited from abroad. Only one Haitian agronomist did an internship at the project. The irrigation system was constructed by Israeli experts. The drainage of the plot was realized by Cubans. The technicians are Dominicans. The lead engineer is a Peruvian who received education in Israel. However, the project also led to local employment. By February 2015 there were 600 jobs, from security agents to mechanics, topographers, agronomists, epidemiologists and agricultural labourers. They expect more employment opportunities in the future. The University of Limonade is interested in the construction of a field for the nursing of banana plants. And according to former Minister of Agriculture Thomas Jacques, five other companies have shown interest to start a banana plantation of about 3000 hectares.

And the local farmers? They become shareholders…

Local farmers let their cows graze on the parts of the project area that are not yet in use. The idea is to fence 10 hectares for grazing purposed, so that these farmers can keep their cattle and use the dung for compost on the plantation.

An important aspect of the project is the involvement of local farmers’ organisations. The 3000 farmers who have been expropriated from their lands, were encouraged to strengthen their farmers’ groups. The eight farmers’ associations united in one federation. They received the materials and resources to prepare the fields of the plantation. AGRITRANS regards them as ‘shareholders’, for 20%. The investors own 80% of the enterprise. The farmers have a double role: they are shareholders for 20% and therefore entitled to dividends or parts of the profit; and they are employees of the enterprise. We don’t have information about their salary.

After more than 50 years bananas were again exported from Haiti. An interesting initiative. Everybody hopes that it will also bring a better living to local farmers, and not only to the investors and real owners of the enterprise. Some people say that the profits of this banana export are needed for paying back the Petrocaribe loans (petroleum from Venezuela that was obtained under special conditions). If this is true, it remains to be seen whether the average Haitian benefits in economic terms of this initiatives.

The AGRITRANS project is part of a larger package of strategic projects for growth and economic development in the North East. Other projects of this package are the Caracol Industrial Park, where already 4,000 jobs have been created out of a projected 60,000 for 2016; the University Campus of Limonade, financed by the Dominican Republic; an agro-industrial micro park in Saint Raphael for growing rice and vegetables; an idea for infrastructural development of the historic and touristic potential of the region; and a regional support center for companies.

[1] HOPE : the Haïti Hope Project is a $9,5 million 5-year plan for a public-private partnership between companies, multilateral development organisations, the US government and non-profit organisations for sustainable economic development of agricultural projects in Haiti. Before, the production of mango had already received support from HOPE.