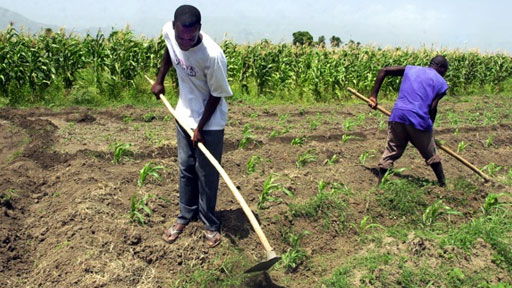 Over the years, the Coordination Europe-Haiti has consistently lobbied for strengthening Haiti’s food sovereignty. Due to an extremely open market and years of neglect of the agricultural sector by the Haitian government, Haiti has become greatly dependent on food imports. At the moment, while cheap textiles represent the largest component of export revenues, food imports form the largest part of imports. Food insecurity is high and paradoxically highest in rural areas where self-subsistence farming is the rule and where people are more dependent on local produce.

Members of the Coordination Europe-Haiti support local partners in Haiti, with a wide range of programmes in the area of agriculture. Examples are: vocational training and strengthening of farmers’ cooperatives, with particular attention to the status of women farmers; development of profitable food chains, for example in the dairy sector and agro-ecological projects.

Partner organisations in Haiti, supported by the Coordination Europe-Haiti in Brussels, have successfully lobbied the European Union to give new priority to its aid programmes in Haiti. From 2014 to 2020 rural agricultural development is one the EU’s four priorities in Haiti.

On April 21 2017, in the presence of European Development  Commissioner, Mr Neven Mimica, an agreement has been signed which accomplished un additional financial contribution of 4 million euro to the Food Security South programme (SECAL) in order to support the post Matthew recovery.

This funding envelope permits a two-year extension of the SECAL programme in order to improve food security and income of the rural population still vulnerable after the passage of the hurricane. The SECAL programme, launched in 2012 and co-financed by the French Development Agency (AFD), initially geared at increasing the agricultural  production of the Cayes plain. According to the EU, this new funding envelope will allow the programme to expand, including also the hills, in order to support the reconstruction of the means of production of the farmers hit hardest by Matthew.

The challenge is firstly to develop meaningful and effective programmes that can help smallholder farmers produce sufficiently for their own families, and secondly to help turn their farm into a viable business and sell their produce at local and regional markets.

The Coordination Europe-Haiti is concerned about the delay in the negotiations between the EU and the Haitian government regarding the implementation of the Programme Indicatif National 2014-2020. Good intentions have not yet been translated into practice. We will continue to push for speadier action. The EU and the Haitian government should collaborate closely with local farmer organisations and civil society initiatives, in order to make agricultural development a success.

The food security situation in Haiti has significantly worsened late 2015 early 2016, due to a combination of drought, El Niño, lack of government support to local farmers and deterioration of the socio-economic situation. According to the Haitian National Council on Food Security (CNSA) as much as 3,6 million people face food insecurity.

The Coordination Europe-Haiti continues to encourage support to local small farmers as a preventive measure for further deterioration of food security. If food aid would become necessary, aid agencies should give priority to buy locally  available food commodities. Importing food to counter the crisis should be limited to complement only what is not locally available. Small farmers could otherwise face difficulties to sell their own commodities if competing food aid fails to buy their stocks.