Four out of five Haitians dream of a future elsewhere 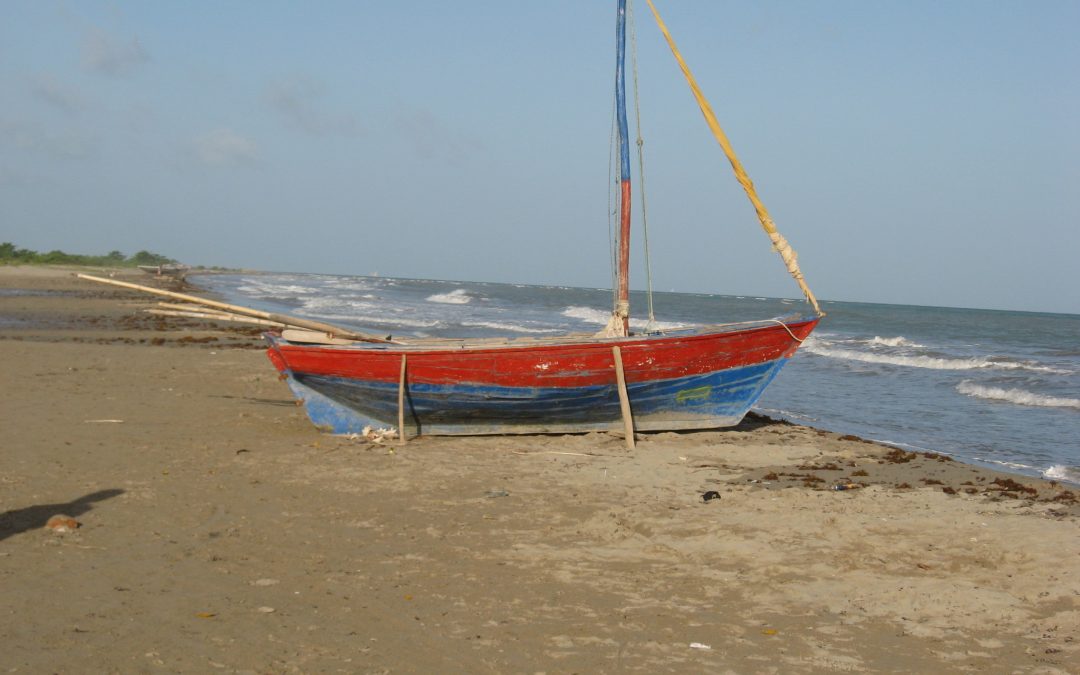 Safety is the main concern

Six years ago, Haitians were mainly concerned about the economic situation. In a survey, lack of security received less than 10 percent of the vote. But according to a recent survey, gang violence, kidnappings and murders – in short, security – now completely dominate the residents. Everything else is secondary.

In fact, the report by OCID (partnership of human rights organizations), published in mid-January, confirms what everyone could already predict. Of all the problems Haiti is struggling with, violence, kidnappings and murders have the greatest impact on society. The government is out of control and armed gangs are in control in ever larger parts of the country. Initially confined to certain working-class neighborhoods around the capital Port-au-Prince, the gangs now control important access roads in the north of the country as well. Since last June, it has been practically impossible to travel by road from Port-au-Prince to the coastal town of Les Cayes on the southern peninsula. This became even more acute after the severe earthquake in August and severely hampered relief efforts. But also many other places can now only be reached safely by air.

literally “Civic Observatory for the Institutionalization of Democracy”) first surveyed Haitians views on a wide range of topics in 2015. At the time, the main concern of the majority of the population was economic insecurity, lack of work and income and consequent poverty. Six years later, in October 2021, OCID took stock again. The results are alarming. Among other things, it shows  that four out of every five Haitians would emigrate if the opportunity arose. This desire is strongest among young people between the ages of twenty and twenty-four.

“Politicians lie to get elected”

Trust in politics and democracy has fallen to an all-time low. Less than 50 percent say they will vote in new elections, whereas six years ago 64 percent intended to do so. A third of the Haitians surveyed say they would not vote in any case. This is not surprising, given the answers to other questions. For example, 71 percent agreed with the statement that politicians lie to get elected, and almost 50 percent agreed that politicians “don’t worry about people like me”. However, trust is not only lacking in politicians. The same is true for various social sectors, such as churches, business, non-governmental organizations or government agencies, such as the police: there is little or no trust on the side of the Haitian population for these institutions. 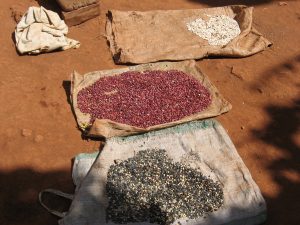 OCID observes that the population, in the grip of an all-destroying insecurity, experiences this as the problem that transcends all others. Six years ago, insecurity was still a major concern for only 9 percent of those surveyed, now it concerns 62 percent. Everything else, the earthquake, the food shortage (according to calculations on Reliefweb, 46 percent of Haitians will not have enough food during the first half of 2022), the lack of fuel and electricity, the political impasse with Prime Minister Ariel Henry acting as president after the previous president Jovenel Moïse was assassinated in July 2021; it all pales into insignificance compared to the violence and insecurity.

OCID asks itself how the population’s trust in political institutions, such as parliament and government, can be restored. The first recommendation is that the de facto government should do everything possible to restore security, protect citizens and create a climate that allows for the organization of elections. This is precisely where the problem lies. The current government, if it can still be called that, is unable to deal with the gangs.

This is not to say that Haitians are complacent. Some of them are choosing to seek their fortune elsewhere. 80 percent of the people dream of living abroad, but in the end only a small part dares to make the jump: over land to the Dominican Republic, or the dangerous trip by boat to the coast of the United States.

Other Haitians are peacefully fighting for a new way of doing politics. They united last year in what is now known as the Montana Agreement, named after the hotel where concrete plans were made last summer. Their proposal is a transition period that begins with the appointment of a temporary government. On Sunday, January 30, the 42 members of the Montana Accord elected Fritz Alphonse Jean, former governor of the Central Bank, as transitional president. And former senator Steven Benoît has been appointed as prime minister of the transitional government. The first task of the transitional government is to ensure that people can safely return to the streets. Only then is it possible to start talking about elections. For example, the police corps will not only have to be better armed, but also screened for ties to the gangs. The transitional government will also have to cut the flow of arms and ammunition to the gangs, through proper border controls, and by checking the access routes to gang-controlled areas for arms shipments. The question is, however, by whom this president and prime minister will be recognized in Haiti as abroad, and whether they will have sufficient power and competences to actually improve the situation. 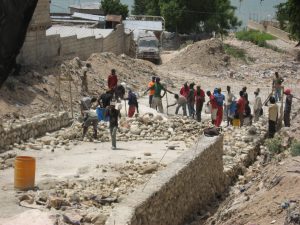 Recently, three hundred Haitians living in the United States publicly joined the Montana Accord. Among them are prominent figures, such as Michelle Montas, the widow of journalist Jean Dominique, who was murdered in April 2000.

It is hopeful that this agreement will unite a broad cross-section of Haitian society: political parties, trade unions, peasant organizations, the Haitian Bishops’ Conference, the Federation of Protestant Churches, women’s and human rights organizations. More than 990 Haitians, all on behalf of organizations and movements that together represent millions of Haitians, have signed the agreement. Only one party has been excluded from participation: the PHTK, the party of assassinated President Jovenel Moïse and his predecessor Michel Martelly, and also the party of current Prime Minister and President Ariel Henry.

Ariel Henry is not only a representative of the party many Haitians hold responsible for the crisis, he also has not been elected or appointed in the manner enshrined in the Constitution. President Moïse had nominated him for the position of prime minister a few days before he himself was assassinated. This nomination has never been approved by Parliament. Most of the Haitian population therefore does not see him as the legitimate head of government.

For the time being the Core Group opts for Ariel Henry

But the international community, especially the countries and organizations united in the so-called Core Group (formed by the ambassadors of Germany, France, Brazil, Canada, Spain, the United States and the European Union, and representatives of the United Nations and the Organization of American States) thinks otherwise. For them, Henry is the closest person to a legitimate head of state. And that makes him the first interlocutor and the man with whom agreements can be made about how Haiti should proceed, and what role can be played by foreign countries.

On January 21, Canada, one of the members of the Core Group, hosted an online meeting on the crisis in Haiti. In addition to the Core Group members, representatives from Mexico and other Latin American and Caribbean countries also participated in the consultation. Ariel Henry participated on behalf of Haiti. The opposition or civil society representatives, such as the 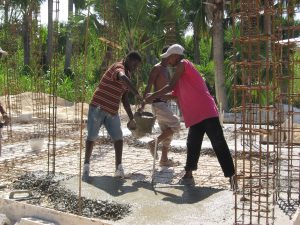 Montana Accord, were not present. Various countries promised (financial) support. Prime Minister Trudeau of Canada pledged an additional 50 million Canadian dollars for health care, security and infrastructure, while Deputy Secretary of State Sherman assured the United States that his country will continue to support Haiti. Insecurity and the lack of elections were the main topics of discussion. Prime Minister Henry said he will remain in office until those elections are held.

The fact that Henry has no intention of leaving (an election date has not been announced, barring that elections are impossible in the current situation) is fueling tensions in Haiti. In a little while it will be February 7, an important date for Haitians: on February 7, 1986, dictator Jean-Claude Duvalier (Baby Doc) was expelled from the country, ending a brutal dictatorship that had lasted almost 30 years. Since then, February 7 has traditionally been the date on which a new president is installed. According to himself, the term in office of the murdered Jovenel Moïse expired on February 7, 2022, while his term, according to many Haitians, had already ended on February 7, 2021. And now Henry would stay on as unelected “president”…..

It is not only the opposition who opposes this. A group of former ministers who served in Moise’s government also believes that Henry should resign from his position on February 7. Their considerations are that Moïse would also have resigned on that day and, perhaps more importantly, Henry has done nothing to improve the dramatic situation the country finds itself in recent months, with the lack of security at the top of the list.

Meanwhile, the violence and killings continue unabated, and voices are sometimes heard suggesting support from abroad. Not only financial support, but perhaps also physical support, in the form of a mission to help the Haitian police to curb the violence. But any intervention by anyone is very sensitive in Haiti, given the negative experiences in the recent past. And not only Haiti, but also the international community itself is rightly hesitating, remembering debacles such as Afghanistan.

And the Haitians? They continue to dream of a future elsewhere and sometimes turn their words into dangerous deeds. Over the past year, the number of Haitian refugees rescued from the sea has exploded. In 2020, 418 Haitians were rescued from the sea by the US Coast Guard, in the first nine months of 2021 there were 1,527, and 802 in the last quarter of last year.

This article was translated from Dutch and originally appeared in La Chispa (www.lachispa.nl)