First anniversary of the earthquake in the Great South of Haiti

Reconstruction is still overdue, but there is hope

This August 14, 2022, it has already been a year since a powerful earthquake of 7.2 magnitude on the Richter scale shook the Grand Sud (Great South) of Haiti. For this first anniversary, some remembrance activities were organized here and there, but nothing special, because the promises of reconstruction announced with great fanfare were not kept. Emergency aid was certainly provided, especially by NGOs rushing to the bedside of the victims. The latter have benefited from food, cash distribution, health care, some support to resume their economic activities, particularly in agriculture and small business. But we are far from this great movement of reconstruction of the Grand Sud to highlight on new bases, the great agricultural and tourist potential of this region in order to durably change the living conditions of a population regularly exposed to natural hazards.

600 million dollars had been announced, following a conference on aid for the reconstruction of the Grand Sud of Haiti. “This money will not go into the hands of the government, but will be managed by each donor and according to its own procedures. Nothing has yet been disbursed and the procedures to get this money out will apparently be long,” de facto Prime Minister Ariel Henri lamented essentially in a speech on August 14. 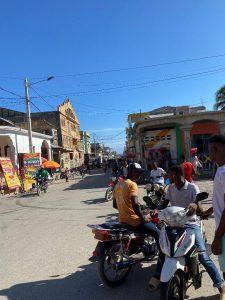 Two weeks before the commemoration of this first anniversary of the earthquake, the government hastened to open to traffic an unfinished temporary bridge thrown over the Grand-Anse river, at the entrance to the town of Jérémie, to relieve the suffering population and travelers forced to ford this river since the earthquake that had severely damaged the old bridge. Despite the clearly visible imperfections of this infrastructure, the inhabitants of Grand’Anse (southwest of Haiti) feel relieved to no longer have to wait for the river to recede during the rainy season to cross it.

After the earthquake, NGOs made some interventions, but they remain very limited, given the scale of the needs and they do not attend to the structural problems. “Many people still live under tarpaulins in their yards or with friends, because they lost their homes and without a support program, they don’t know when they will be able to rebuild them“, a member of the Board of Directors (CASEC) of the 3rd Communal Section Haute Guinaudée, Jérémie, confided to us. The earthquake contributed to further impoverishment of the peasant population of Grand-Anse who had to face a few years earlier the violence of Hurricane Matthew. “We hadn’t even recovered from the consequences of Hurricane Matthew, which had ravaged our region in October 2016, when the earthquake hit us. We had lost not only loved ones, but also our means of existence, because many gardens were engulfed in landslides, cultivable areas became impassable,” said Pierre Leçon Mécil, another member of the CASEC from the 4th Section of the Commune of Roseaux, which took part in a conference on the localization of aid organized, within the framework of this first anniversary of the earthquake, by the British NGO Action Aid together with the Agriculture and Environment Commission (CAEC) of the NGO platform (CLIO) and PADED, an agro-ecological platform. This local authority is worried about the forthcoming return to school, an event which generally 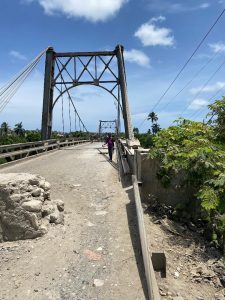 causes great expense for the population, which this year will not be able to pay the fees required by the schools, and the prolonged phenomenon of insecurity in the capital which prevents movement of goods to and from the Great South, particularly agricultural products.

This local authority is worried about the forthcoming return to school, an event which generally causes great expense for the population, which this year will not be able to pay the fees required by the schools, and the prolonged phenomenon of insecurity in the capital which prevents movement of goods to and from the Great South, particularly agricultural products. Despite everything, the population remains hopeful that tomorrow will be better even if they remain on the alert because of the tremors which are increasing every day. According to a seismic bulletin published on August 8, 2022 by AGERCA (Alliance for Risk Management and Business Continuity) and taken up by Alterpresse, Haiti recorded during the month of July 138 earthquakes ranging from 1.3 to 5.2 magnitude on the scale Richer and the department of Grande-Anse was the region most shaken during this period. “We experience fear in our souls every day with these repeated shocks. But we are beginning to understand what it is and thanks to the training received, we now know more or less what to do”, declared a resident of Jérémie, the main town of Grand’Anse.

This first anniversary also gave rise to reflections on the question of aid in Haiti towards which a certain dissatisfaction reigns in the country as well as on the governance of the State. The successive experience of humanitarian assistance needs after two major disasters has had a strong impact on the populations of Grand-Anse. Organizations are beginning to organize themselves so that aid is better managed, with respect for human dignity. Speaking at the conference on the localization of aid, a representative of the feminist organization SOFA (Solidarite Fanm Ayisyen) explained how her 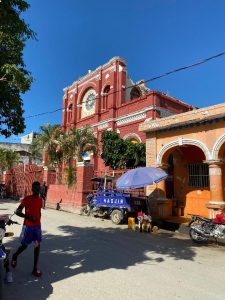 organization, supported by other groups, mobilized to demand from NGOs and the authorities a better organization distributions, especially when it comes to vulnerable groups. “As an organization promoting gender equality, the right to dignity, we had shared with our partners our concerns about the way aid was distributed, sometimes with violence to supposedly maintain a certain discipline. We had lodged a complaint at the sectoral table, we had set up a monitoring committee. And thanks to these interventions, improvements have been made”, testimony of Françoise Innocent, from SOFA. At the same conference, another woman, Louisianne Nazaire from a federation of women’s groups in Grand’Anse (OFTAG) confided that despite the difficulties of all kinds, she believes that her organization has strengthened its management capacity, because the partners with whom the federation has had the opportunity to collaborate in the management of these crises have made the effort to facilitate a greater participation of local structures and authorities in their interventions. Recall that according to the final report published by the Haitian Civil Protection Directorate on September 4, 2021 for the three geographical departments of the Great South, 2,248 people had lost their lives, 329 are missing, 12,763 were injured, 53,815 houses had been destroyed. destroyed and 83,770 others damaged in the earthquake of August 14, 2021. Rural areas were the most affected area in the three geographical departments.