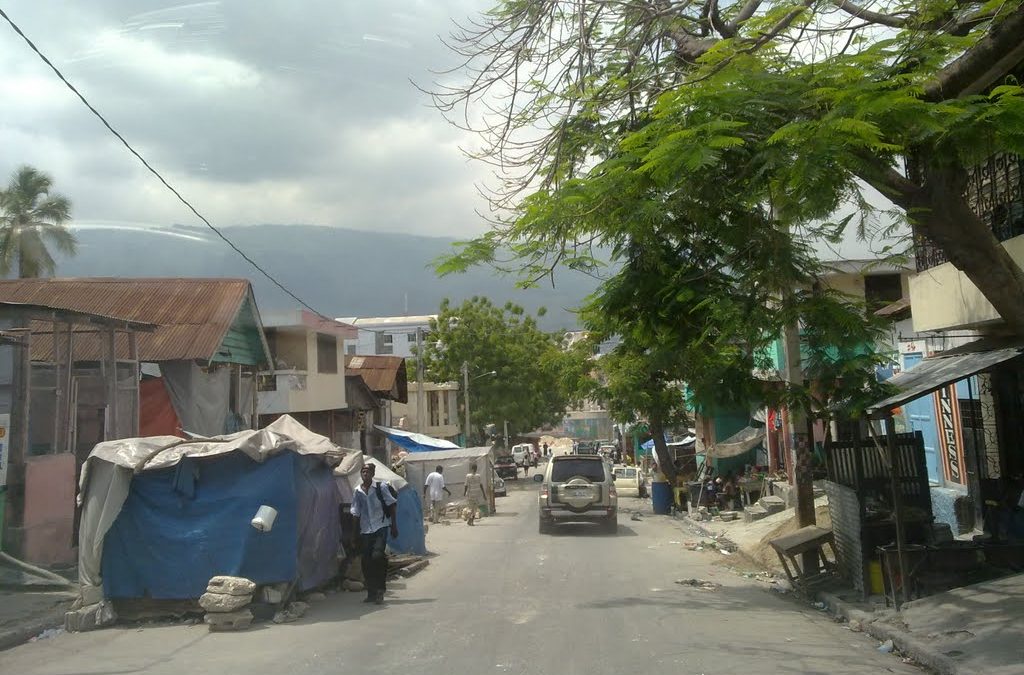 This past weekend, or more precisely Saturday September 19, armed groups attacked the residents of Bel Air, one of Port-au-Prince’s oldest neighbourhoods, not far from the cathedral of Port-au-Prince and close to the National Palace. Since the end of August this has been the fourth attack at the people of Bel Air. In full view armed groups have raided the neighbourhood, setting fire to dozens of houses, forcing numerous families to flee their houses, often carrying small children in their arms and without time to take anything with them. These victims are scattered throughout the neighbouring sections of Port-au-Prince and many are sleeping on the pretty star in the middle of the large square in the centre of town: the Champs de Mars, near the Palace. Perhaps the most distressing of all this is the total indifference of the state authorities who have done nothing to stop these cruelties. The victims have not received any support from the government in terms of food or relocation.. The police is doing next to nothing, while the international community in Haiti is keeping a complicit silence about all these cruelties.

After each attack, the name of the same person is mentioned as being responsible and in charge of these actions. All witnesses say it is the infamous former police officer Jimmy Chérizier, alias Barbecue, who led the attacks together with his troops assembled from various parts. According to the people of Bel Air, Barbecue (who is in charge of the recently joined armed groups called G-9) wants to get in control of the area. Faced with the opposition of the residents, among them police officers living in the area, Mr. Chérizier, with the blessing of the government, has led these attacks forcing the residents to leave. The losses are enormous and the people are extremely traumatized.

The most astonishing of all this is the lack of concern of the government authorities. The attack on Saturday left two people dead. And it is said that during the attacks in August several people died, without anyone knowing the exact number of victims. The most worrying is that from the side of the police or a government representative nothing so far has been publicly announced about what has happened or the number of victims

The police force, which should protect the people, is completely disintegrating and demoralised because their grievances are not being heard. As a result, within the police force a group calling themselves Fantôme 509 has started to use violence in order to get what they want. On Saturday September 12 they took to the streets with a lot of noise and forcedly liberated four fellow police officers who had been arrested in relation to the investigation into the murder of the president of the Bar Association, Monferrier Dorval. Last week they again took to the streets to demand the liberation of police union activists who are imprisoned.

Amidst all this, president Moïse published a decree that announced the forming of a provisional electoral council that should not only organized elections but also a referendum to adopt a new constitution. The president gave himself all the power while according to the current constitution the electoral council should be independent of the executive power and should by no means be nominated by him. But making use of internal divisions within several sectors of civil society he was able to gather a number of people who are willing to support his project. Such is the case for representatives of religion, Vodou and human rights. For the other sectors (the council has nine members) the president himself made the choice, considering the selected people, where in the past all this was done by consensus between the different political actors. Most of the new members are totally unknown and it is hard to know who has really chosen them.

Because of the presence of someone well-known within the human rights movement, the composition of the new electoral council has already been much talked about. It concerns Mrs. Guylande Mesadieu, the founder of Zanmi Timoun, an NGO defending the rights of children and youth. Mrs. Mesadieu is the wife of Mr. Antonal Mortimé, former general secretary of  the POHDH (Platform of Haitian Human Rights Organisations) and currently the coordinator of another organisation “Collectif Défenseurs Plus”. Four years ago, Antonal fell out with other human rights groups about the choice of the previous electoral council that recently resigned. The opposition parties and many other sectors of society are flabbergasted seeing Mrs. Mesadieu as a member of the council. More than one person in the media considers this to be a large blow against the democratic movements as well as against human rights organisations more in general.

The forming of this new electoral council was announced only a few days after a kind of instruction had been given by the American State Department and repeated in a tweet of the American ambassador in Haiti, Mrs. Simpson. In this tweet the ambassador is demanding the Haitian president to quickly install an electoral council and is threatening to “sanction” everyone of the opposition if they oppose themselves to this council. The tweet has been widely criticized and is considered to be insulting to the Haitian people. But it is also meaningful evidence of the level of interference of the United States in Haiti’s internal affairs.

The forming, without consensus, of this new council has unveiled even bleaker days for the country. How is this council going to organize elections within a context boosted with the presence of armed groups just about all over the country taking the law into their own hands, and practically refusing all opposition parties to participate? The president and his party PHTK, as well as the Unite States and part of the international community, want the elections to take place by all means. They are pretending that Haiti is a democratic country and this way they want to justify their presence as well as the money they are spending in the name of the Haitian people. Certain analysts think that the elections in the United States also play a role in this sudden rush to organize elections in a situation where all institutions are either completely demobilised or inoperative. Meanwhile there is a dictatorial authority that is strengthening itself through massacres against a defenceless population and through the destruction of all its democratic institutions.