AGRITRANS and the banana production in Trou du Nord 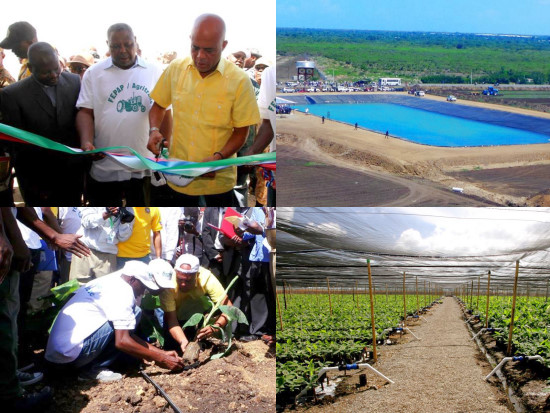 In October 2014, president Martelly officially launched the AGRITRANS project by planting the first organic banana seedlings in Trou du Nord. The plan had first been launched in November 2013 and the man in charge of the plantation was Jovenel Moïse, who meanwhile became president of the country in January 2017.

The project aimed at producing organic bananas destined for exportation, implicating 3.000 local farmers. The first 400 ha of a total of 1.000 ha planned for the project had been cleared and the expropriated farmers, in compensation for the loss of their land, were to be employed at the plantation. The investment for preparing the land came from the FEPA/AGRITRANS consortium and made it possible to acquire modern materials, create an artificial lake and install irrigation pumps. The project also aimed at creating 3.000 jobs. The total costs were 27 million dollars of which 6 million dollars were contributed by the Industrial Development Fund. An additional amount of 15 million American dollars were made available for the reinforcement of AGRITRANS.

The project consisted of an agro-industrial banana plantation producing for exportation and located in a free-trade zone, exempting the project from exportation and investment taxes as well as customs for a period of several years. This also means that 70% of the production has to be exported while 30% is to be sold at local markets. AGRITRANS may use the land of the farmers for at least 25 years.

On September 8, 2015, the first shipment off organic bananas left the port of Cap Haïtien for Hamburg, Germany. In April 2016, a second shipment had been prepared for exportation to Germany. After that, there has been complete silence around the plantation and the initiative.

Because we were curious to know how the project is developing and what are the views of the local farmers involved in the project or not, we took the initiative to have the farmers voice their opinions about the enterprise. A first meeting took place in January 2017 with farmers in Capotille, followed by a second meeting in March 2017, this time with a group of JILAP located closely to Trou du Nord.

Someone else says that the project is a good thing. Only a few farmers have lost their house or their land, but this was not fertile anyway.

Why are people in favour of the project and why is Jovenel so popular ?

In what way is this or isn’t it a sign of hope for Haiti?

At the end of the second meeting, a farmer of the FEPAP is giving additional information and some clarification:

‘Because the state needed the land they asked the implicated farmers to organize themselves. Eight associations were created with each around 1.000 members. The eight associations formed the Federation of Agricultural Planters of Pisince (FEPAP) which has between 7.000 and 8.000 members. It has been agreed that only the members of FEPAP could work at the plantation. At the beginning when they were preparing the land and for the first planting they needed about 2.000 workers each month, according to a rotation system. But now this number has decreased to 300 per month. At the start of the next season, a larger number of workers will be accepted for a couple of months. The project decides each day how many farmers may work, and each farmer may work only one day per week. The wages are 260 gourdes for a day’s work, which is the same one get paid at the industrial park. 5% is withheld for the Federation.

The project is advantageous for many farmers who used to go to the Dominican Republic. There’s no banana cultivation in the area. The eight associations have been promised 20% of the profit of the project for social activities, such as the building of schools. It has been four years since the project started and there has not been any profit so far, but we are patient.

Recently, new seedlings have been planted for the next season. We have not been informed about the amount that has been sold, nor about the price. As far as we know 19 containers have left for Germany.’

Current situation of the plantation

On March 17, 2017, journalists of the newspaper ‘Le Nouvelliste’ wanted to visit the AGRITRANS plantation. They observed a marked deterioration of the plantation. They were harassed by the guards and could not take any photos. No bananas have been exported since July 6, 2016. The commentary of the people in charge of the plantation is: ‘the farm lies fallow, but there is a strategy behind this.’ They are talking about a ‘profitable sacrifice’ losing about 6% of the investments in order to obtain a higher profit. (http://lenouvelliste.com/article/169451/detruire-les-anciens-plants-de-banane-est-un-sacrifice-rentable-selon-le-president-dagritrans).